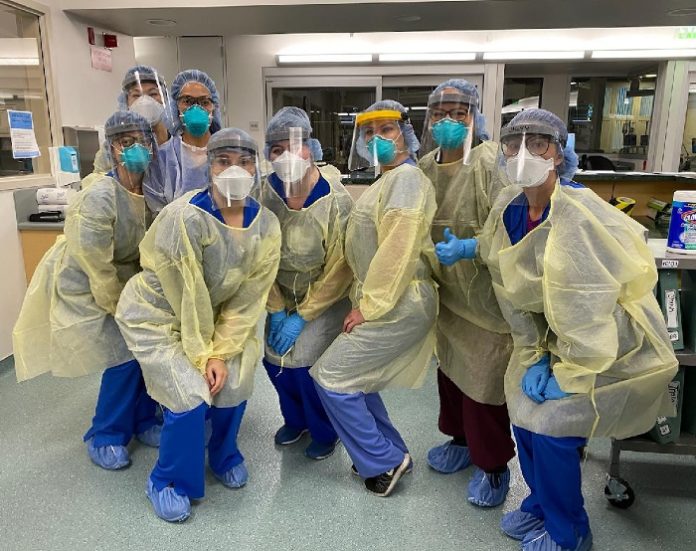 It began with the shutdown of Image Options’ San Jose facility in response to the coronavirus, prompting the Foothill Ranch commercial printer company to prepare for a companywide closure.

As Image Options began winding down its OC facility, a 128,000-square-foot building just across the street from Oakley Inc. headquarters, the daughter of one of its engineers called, asking if the company could make face shields for the Whittier hospital she worked at.

The first prototype was turned around the next day, tweaks were made and a 100,000-unit purchase order from the hospital followed.

Since then, Image Options reconfigured San Jose and Foothill Ranch’s production lines to make shields for the face as well as checkout counters, ramping production to about 70,000 face shields daily. It’s also hired more than 40 temporary workers to help existing employees produce the nearly half a million shields the company has so far shipped.

The face shields retail for about $3.20 apiece. The price varies based on quantity ordered, with a purchase minimum of 10.

Orders have also come in from contractors, Ace Hardware, upscale Bay Area grocer Zanotto’s Markets and others for checkout shields designed to protect grocery and retail cashiers, among other uses.

“It’s a huge changeover, but because we focus so much on custom work, it was just like switching over to another custom project, only it’s kept going,” said founder, Chairman and Chief Client Advocate Tim Bennett.

It’s a shift for the digital printer’s business, which did $47 million in sales last year, hand-ling large-format signs and experiential installations for companies.

About half its business is on the trade show and events side, which is now at a standstill due to the pandemic. The rest of the business comes from work for corporate clients and retailers, including all North American stores for Ikea, permanent store signage for Walmart stores in 13 Western U.S. states, luxury house Christian Dior, Skechers and Foot Locker.

The company’s expertise extends far beyond simple signage like banners and brochures. It provides a pivotal part of the branding process via not just 2D signs, but the creation of large-scale retail environments and experiential buildouts.

More than 50% of production is now dedicated to personal protective equipment-related manufacturing.

The executive team and much of the office staff have learned to work from home, with communication actually strengthened as a result, according to Bennett.

Image Options, like others, went through the process of applying for money from the Paycheck Protection Program, part of the $2.2 trillion Coronavirus Aid, Relief, and Economic Security Act (see story, page 1). Its loan is through JPMorgan Chase and took four different tries to fill out the application as the form continued to be modified before it was finally completed.

“It was definitely frustrating, but when I look at the enormity of what they tried to do in record time, obviously there’s a lot of complexities to it,” Bennett said.

The company had hoped to cross the $50 million mark in sales this year, although it’s hard to say now if that will happen.

A deal that had been in the works for this spring—it would have been Image Options’ second acquisition after 2017’s buy of Splash Events in San Jose—is also now stalled.

“That’s the million-dollar question,” Bennett said of how the business ends 2020. “We just don’t know. It’s not going to come back on as they keep saying on TV. You’re not going to flip a switch and say ‘OK, we’re back.’”

In fact, Image Options is girding for a new operating environment that would still support the need for the PPE gear as people and companies emerge from stay-at-home orders.

“There are going to be certain restrictions on large group meetings and this would apply right down to restaurants. Nobody wants to be the person that starts off another [outbreak],” Bennett said.

The company is confident its diversified business and ability to utilize its machinery and expertise across different industries will provide a safety net in some ways.

“The graphic design side, which is the buildings and corporate lobbies, are still being built and have to be finished so that keeps our fabrication and other production going. We don’t know about the event side [of the business] and the poor retailer, they’re just going through a massive paradigm shift in the marketplace in the first place,” Bennett said.

“So we are trying to create different [business] channels. We’ve been through 9/11. We went through the 2008 recession and we came out, frankly, better and stronger companies at the end of it because we had to get more diligent and smarter.”