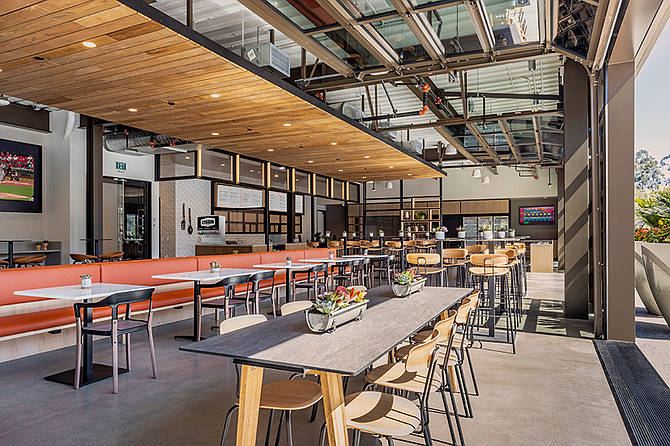 Now the region’s largest commercial real estate landlord has a slate of new buildings that are expected to draw plenty of interest from tenants wanting low-rise product as their workers return to the office.

The state’s largest office owner, with more than 560 buildings in its portfolio—a bulk of which are in Orange County—has opened the first phase of its latest ground-up office campus, Innovation Office Park, in the Irvine Spectrum area.

The loft-style office project is on 73 acres, roughly the size of Irvine Co.’s Fashion Island shopping center in Newport Beach. It’s near the intersection of the Santa Ana (5) Freeway and Sand Canyon Avenue.

The project will ultimately span 1.1 million square feet. The just-wrapped first phase total 300,000 square feet across eight two-story buildings. Many but not all of the buildings are expected to be occupied by single tenant.

Innovation Office Park’s design stands apart from other products in Irvine Co.’s portfolio, with a “workplace designed for health and wellness,” according to the developer, whose marketing materials for the campus emphasizes an abundance of features and amenities geared toward indoor-outdoor working, and a bevy of customization options for tenants.

“We wanted to deliver an open-air village that is unlike anything in the market today, and makes employees want to return to the office,” said Steve Case, executive vice president of Irvine Co.’s office division, during a tour of the project last week.

Rapid Construction
Irvine Co. first announced plans in 2019 for Innovation Office Park, on the former Traveland USA site on the edge of the Irvine Spectrum area.

The office project’s first phase is ahead of schedule, a feat for construction projects during the pandemic, officials noted.
“We are fortunate to finish just ahead of schedule,” said Roger DeWames, senior vice president of development.

Leasing efforts recently kicked off, with the Irvine Co. team “waiting for the project to wrap construction before showing off the project in person,” notes Vice President Tom Greubel. Rental rates haven’t been disclosed.

Three additional phases at Innovation Office Park will be built out over the next several years, adding 20 more buildings.

The new project comes as Irvine Co. recently completed the second phase of development at the nearby Spectrum Terrace, a mid-rise office complex that’s seen its share of leasing activity of late.

Initial demands for these flexible offerings were so strong, the company added an additional 10,000-square-foot floor at the new office park to be used for the Flex Workspace+ program, the developer said.

Companies that have shown leasing interest thus far include those in “creative sectors, such as media, gaming and software,” Case notes.

“We are seeing strong early interest as health metrics improve, the vaccines rollout and companies plan their return to the office and post-pandemic growth strategies,” he added.

Like other area projects, Irvine Co. didn’t skimp on the details at Innovation Office Park, from a 150-year old olive tree, to outdoor flooring with handpicked stones, to a state-of-the-art kitchen within a 40,000-square-foot amenity building.

Irvine Co.’s investment in a low-rise office product is likely to pay off in the wake of the pandemic, which has bolstered tenant demand for less-dense creative office buildings with outdoor connectivity.

The company implemented additional design changes to Innovation Office Park over the past year to address emerging tenant concerns, such as high-tech air filtration systems, rollup doors that lead to private patios, and skylights for maximum energy-efficient daylighting.

Irvine Co. has noticed this increased demand for low- to mid-rise offices, with one of its tenants, Advantage Solutions Inc., recently relocating from its space within the high-rise Irvine Towers complex into a smaller building at the Lakeview Business Center.

Case said certain companies still choose the more traditional high-rise option, pointing to nearly full occupancy for its towers at 200 and 400 Spectrum Center, which opened a few years ago.

Like Innovation Office Park, that mid-rise office complex will ultimately span about 1.1 million square feet. A planned third phase will include three more mid-rise offices and other buildings.

The Irvine Co. projects are two of the three largest office developments currently under construction in OC, along with the multibuilding expansion of Edwards Lifesciences Corp.’s headquarters along Red Hill Avenue in Irvine.

Irvine Co., which manages the buildings it owns, upped its OC portfolio by 1.3% to 35.8 million square feet last year, earning it the No. 1 spot on the Business Journal Property Manager’s ranking. 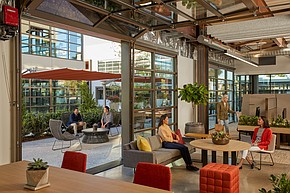 
For digital licensing requests for this article, Contact Kim Lopez