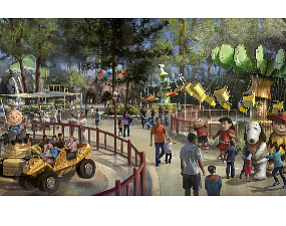 Sandusky, Ohio-based Cedar Fair Entertainment Company said it had record 2013 revenue, up 6% from the year earlier, to $1.14 billion.

The company doesn't break out individual park revenue or attendance.

However, Knott's Berry Farm was called out, along with Cedar Point in Ohio, as a top 2013 performer for its parent during a call with analysts on Thursday.

Work on a redesign of its Camp Snoopy area for children last month. The revitalization includes three new rides. The area is expected to reopen in early summer.

Cedar Fair shares closed up less than 1% on Thursday to a market value of $2.94 billion.