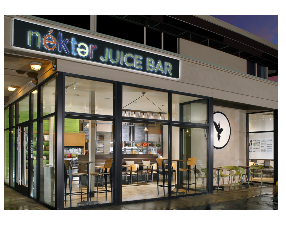 The chain currently has 70 locations in five Western U.S. states—California, Arizona, Nevada, Texas, and Colorado. Its average unit volumes run about $850,000, which works out to systemwide sales of about $60 million.

An additional deal is expected to grow its reach in Texas, where it already has locations.

Nekter said it would have 100 locations open by year-end.

The Texas expansion is for Ft. Worth and Houston, two new markets where a franchisee has agreed to open 12 to 15 locations.

New states, more franchising and a three-year target of 425 locations looks to shift those ratios even more.