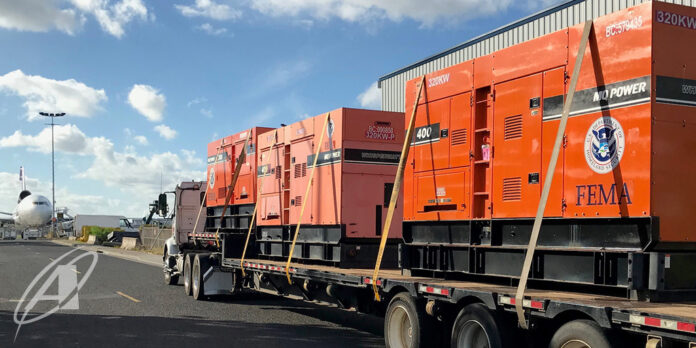 In the early days of the pandemic, getting medical supplies such as gowns, gloves and masks to doctors and nurses became urgent.

The Irvine-based freight forwarder chartered a Boeing 777 VIP passenger plane, filled the cargo hold with supplies and then stuffed even more of the prized equipment onto the empty seats and the overhead bins for a flight from China to Los Angeles.

Once in LA, the supplies were distributed around the country, where medical personnel were clamoring for PPE—personal protection equipment.

“It was one of our more exotic adventures,” Ted Shown, president of the global freight forwarding and transportation logistics company, told the Business Journal last month.
The adventures have paid off: revenue for the company—which provides an assortment of transportation services for air freight, ground freight, and ocean freight, serving companies in a variety of industries—is projected at $250 million this year. That would be about 45% over 2021.

The company remains in expansion mode, with several new locations being added to its national base of operations the past several years, officials report.

“Over the last few years, Aeronet has experienced record growth. Over the next couple of years, our plan is to maintain that growth, including continued expansion in the Southeast United States, and strengthening our position on East Coast,” company Chairman Anthony N. Pereira told the Business Journal.

The Aeronet Worldwide chairman remains the majority shareholder in the privately held company.

There’s no signs of a slowdown for the company.

“During the pandemic, Aeronet’s business actually grew,” said Executive Vice President Kevin Mautino, marketing and brand development. “We recognized early on that, if we were to persist through that period, we had to pivot in order to not rely on industries that would be experiencing a downturn.

“Though we may seem like a big company, we’re relatively small enough in the industry to be nimble,” Mautino added. “A lot of credit goes to our executive management and sales teams for figuring out a winning formula.”

In a sector where delivery and logistics services have been booming, “pretty much everybody” is a competitor, Shown said.

Aeronet recently announced the opening of a warehouse facility in Louisville, Ky., near the city’s airport.

The company calls itself a logistics company that provides transportation services on a global basis—“whether around the corner or around the globe for every kind of product and commodity you can imagine,” he said.

“We are called asset-light. Some of our stations do have local pickup and delivery type trucking, but we are an intermediary,” said Mackowiak, who has been developing business in the area for the company for the past five years.

Louisville marks the firm’s 13th domestic warehouse location; other nearby offices include a 120,000-square-foot spot in Los Angeles and a 187,000-square-foot location in Ontario, both near the local airports.

The company refers to its key outposts as “stations.”

The facilities have warehouses and they also function as terminals because of the constant movement of freight being routed in and out at the various sites.

Shown said the company has been expanding into the fulfillment business with its warehouses. That is where the company stores products in the warehouse and then fills consumer orders for its clients.

One advantage of having the headquarters in OC is the proximity to the Ports of Long Beach and Los Angeles, Mautino said (see story, page 8).

While Aeronet Worldwide does have a Los Angeles-area facility, “Orange County gives us a better setting for management, access to the OC talent pool, and still gives us the ability to develop business in this market,” he said.

Louisville is far from the last expansion the company in planning. The firm says it is developing the Austin and San Antonio/transborder Mexico markets in Texas to complement its presence in Dallas.

Aeronet’s plans also include larger facilities in its markets of Chicago and Newark, N.J. scheduled for this year, and future expansion into the state of Florida, the company says. Miami is a key location for flights to and from South America and Latin America.

The supply chain’s well-known problems of jammed ports, lack of trucks and pandemic-forced business shutdowns has “been a nightmare the past couple of years.”

“It was a complete perfect storm across the entire globe,” Mackowiak said.

“The company itself has been growing very, very strongly for the last five or six years. We continue to see that growth well into the future,” Mackowiak said. “We are anticipating very strong growth throughout the rest of 2022.”

Just over 40 years ago, Portuguese immigrant Anthony N. Pereira founded Aeronet Worldwide Inc. with only $100 and his Buick LeSabre, which he used for deliveries.

What was initially a $100 investment has grown into a major enterprise with a projected revenue of $250 million this year.

Aeronet opened a “station”—the term it uses to refer to a warehouse and shipping terminal—in Santa Ana in 1988 and moved its headquarters to Irvine in 1994.

The company moved its headquarters from San Jose to Orange County because the founder felt it was better for the company’s long-term growth to be in Southern California.

Pereira came to the U.S. in 1956 on a student visa to pursue his interest in aeronautics. He was born and raised in the Portuguese islands of The Azores, located about 930 miles from Lisbon. He felt the need to travel to California to pursue his dreams.

After graduating from San Francisco State University with a degree in World Business and Transportation Management, he immediately entered the industry.

In addition to Aeronet’s 22 offices spread across key markets in the U.S., it has international joint venture partnerships worldwide.

Pereira emphasizes the company’s international growth. Aeronet does that through joint venture partnerships with similar companies in key markets around the world. The company currently has 26 of them and is looking to expand even further.

“Another important part of Aeronet’s success are our international joint ventures. By the end of this year, we expect to have 40 of these partnerships in place. This has been, and will continue to be, a key to Aeronet being a global company,” Pereira said.
—Kevin Costelloe