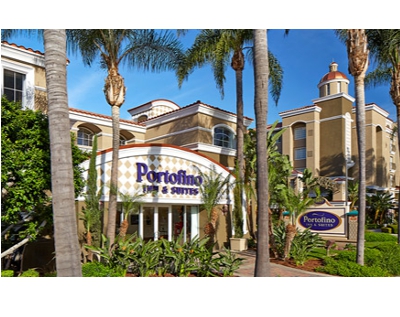 An affiliate of CW Capital Asset Management LLC bought the Portofino Inn & Suites for $26 million, its second such deal in the last few years for the bad debt of a Disneyland Resort-area hotel.

The Portofino is a $99-a-room hotel at Harbor Boulevard and Katella Avenue—walking distance from Disneyland and the Anaheim Convention Center. CW Capital bought the $36.1 million loan on the 190-room hotel last month.

Sheraton is a convention center campus property previously owned by Northwest Hospitality Group, appraised for $56.4 million in 2016, and a two-minute walk from Portofino. Rooms start at about $200.

CW Capital is a Maryland-based special servicer of debt. Its website says it’s “actively servicing” $7.6 billion on 380 loans, has “resolved” $55.9 billion in loans since 2007, and has $99 billion in CMBS loans under management.

Portofino was part of one such commercial mortgage-backed securities deal; owner SDRP I LLC defaulted on a 10-year loan maturation in May and a property appraisal in August plunged to $29 million, from a prior $46 million.

HFF marketed the loan—at the time about $36.75 million—and CW Capital, which had been the special servicer on the CMBS package, bought it in January for the $26 million.

Portofino and Sheraton Park are both on ground leases: the latter on land held by the city of Anaheim, the former on land owned by Peacock LLC, whose address is given on lease documents as the 14th floor of 620 Newport Center, where long-time OC hotel developer-owner T2 Hospitality LLC keeps offices.

Irvine hotel broker Alan Reay said the ground lease likely contributed to the prior owners’ of the hotels defaulting on the debt and the two properties going to CW Capital at a discount—a rarity in the region that has seen acquisitions, renovations of hotels performing well, and announcements of or groundbreakings on premium-level properties.

“It’s not a bad market,” Reay said. “The big issue is there’s too much debt and you don’t own the land.”