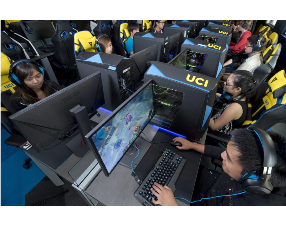 University of California-Irvine next week opens the first eSports arena run by a public university.

The 3,500-square-foot iBuyPower Arena includes 80 custom PCs from iBuyPower in Industry, Calif., and a live webcasting broadcast studio, and cost about $250,000 to build; UCI said no public funding was used.

The arena is open to the public for about $4 per hour.

The gaming event is part of UCI’s eSports program in its Institute for Virtual Environments & Computer Games that will launch next week.

The research university will offer up to 10 academic scholarships on its competitive gaming team.

ESports is a growing segment of competitive gaming that’s going mainstream, a shift evident by the rise of corporate backers, college scholarships for hard-core gamers, and greater ability to obtain work visas in the U.S. through the mastery of a joystick, controller or keyboard.

College Magazine last year ranked UCI No. 1 for gamers based on the types of computer equipment for students, the quality of its gaming teams and gaming programs that include the new eSports offering.