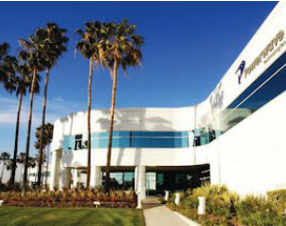 Investors sent shares down 74% in early trading today to a market value of $2.4 million—its lowest value in more than 15 years.

The company listed assets of $213 million in the court filing and liabilities of $396 million.

The bankruptcy filing comes as little surprise—the cash-strapped company has faced mounting financial problems since at least October 2011, when it reported third quarter sales plummeted 51% from a year earlier to $77.1 million.

Since then the company has been hampered by continued declining sales linked to a significant slowdown in equipment spending by Dallas-based AT&T Inc. and other North American network operators.

Powerwave designs and manufactures antennas, filters and other equipment for cell phone towers.

Its devices capture and boost radio signals between cell phones and base stations inside towers.

Powerwave has been trying to conserve capital, an effort that included a $49 million sale lease-back of its Santa Ana headquarters last fall. It also sold off its assets and inventory at its former facility in Suzhou, China, in a $12.5 million deal with Shenzhen Tatfook Technology Co.

The Business Journal reported in mid September the company secured a $50 million credit line amid a restructuring initiative that included shrinking its work force and closing some offices.

In June Nasdaq warned Powerwave it had to boost its share price above $1 for 10 straight trading days to avoid being delisted.

Powerwave also could be delisted based on market value.

It has until March 6 to bring up its market value to $15 million—a minimum mark set by the Nasdaq listing rule—and keep it for 10 days, Nasdaq told the company in September.