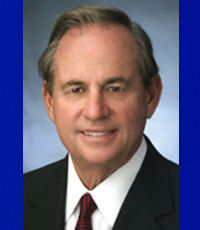 Donald Koll’s kept a low profile since a 2005 stroke limited his speech and activity. But Koll’s intellect remains “100%”, according to those close to him. He remains an active watcher of the real estate market and the company that bears his name, they say.

You’ve seen many former Koll Co. employees strike out on their own. Was that something you encouraged?

It’s a good commentary on my former partners’ and employees’ skills and their training at the Koll Co. that so many have gone on to further business success. Koll Co. always focused on finding top talent, and it is understandable that some of the time that talent would outgrow the near-term opportunity at Koll Co. I have always felt that change is inevitable and represents an opportunity to continually refocus the company’s direction.

You helped shape the county’s commercial real estate landscape. What are you most proud of as a developer? What was your favorite deal? Do you have any big regrets?

There were two projects that were particularly rewarding to me.

First is my work in pioneering the modern multitenant industrial park. Prior to my time, industrial parks were built to minimum standards. They were made up of plain buildings with little landscaping and barely met the user’s needs.

I believed that even industrial buildings should be architecturally interesting with ample, convenient parking and generous landscaping.

My first major multitenant industrial project, Airport Business Center by (what’s now John Wayne Airport), pioneered that approach. Today there are thousands of such industrial parks all across the country.

Second is my work in Cabo San Lucas. Not only did my work there meet my three criteria above, but also because it helped transform that part of Mexico in a very positive way.

In regard to missed opportunities, I never look back, only ahead.

The John Wayne Airport area has changed dramatically in the past several decades, thanks in large part to your development there. Did you ever envision the area would become what it is now?

Almost 40 years ago, when that area was still mostly agricultural, I was telling my team that the area would become the Wilshire Boulevard of Orange County. I am not sure if they believed me then, but they certainly do now.

Did you ever think you’d have as much of an impact on OC’s development and its real estate industry as you have?

When I started in business, I believed I had a reasonable chance to be successful. Fortunately, I chose Orange County to start my business. Starting here when I did, coupled with strong contributions from my many partners and employees, fueled Koll Co.’s growth.

What’s your take on the current real estate market? What would you tell other real estate execs who’ve taken a beating during this downturn?

In good times and in bad there are opportunities in real estate. It’s in the bad times that a company’s capabilities are proven.

My advice to my fellow company leaders is to stay positive, keep your team motivated, do what you have to do to survive and remember things will get better.

How do the challenges you faced in prior downturns compare to what’s being seen in commercial real estate now?

In my experience real estate operates in seven- to 10-year cycles primarily driven by the broader business cycle. Downturns are inevitably followed by upturns.

This particular cycle is more severe than most due to the collapse of financing sources. Because of that, things have taken longer than expected to begin the path to normalcy.

Finally, after almost three years of difficulty, it does appear that the financial logjam is starting to ease and that will inevitably lead to improved market conditions.