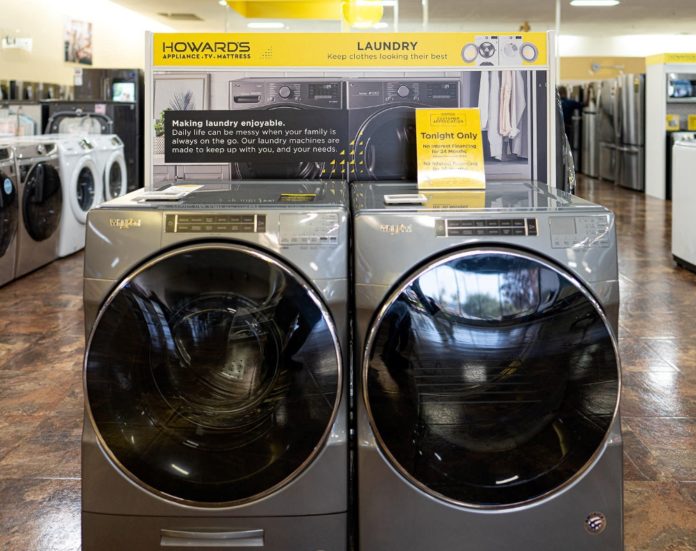 Safe to say the past few weeks have turned out to be a boon for Howard’s.

The La Habra-based appliance retailer, in business for more than 70 years, saw freezer demand in March and April up as much as 1,000%. Refrigerator sales were also up, by more than 90%, company officials said.

The 13-store chain, with a quartet of locations in Orange County, said it has benefited from its multiple purchasing channels and nimble organization, being able to meet customer demand with healthy inventory levels at its 176,000-square-foot Pico Rivera distribution center.

“When you have large organizations, they have a difficult time being able to navigate because the ship is so big. I think with our competition in the marketplace—Best Buy, which is a really strong player in Southern California from a national overview, and Home Depot and Costco—those companies have different levels of complexity in being able to handle something like this [COVID-19] crisis,” said John Riddle, the former senior vice president of home appliances for LG Electronics who now leads Howard’s as CEO and president.

Along with an assortment of appliances, the company also sells electronics and mattresses.

The company wasted no time prepping for a new normal in operations, beginning in March.

The company’s daily Morning Brew meetings—normally dedicated to how to better serve customers—shifted to focus on safety and health measures.

The company didn’t furlough employees and instead boosted pay during the pandemic. Riddle declined to get into the specifics, but said the raises were north of the $2 an hour increase Amazon.com Inc. (Nasdaq: AMZN) announced for its warehouse workers.

“When you have thousands and thousands of employees and hundreds and hundreds of stores, it’s just different and so it’s obviously easier for a company like Howard’s that has 13 locations in Southern California,” Riddle said.

A stop by the company’s roughly 17,000-square-foot location at the Market Place shopping center in Irvine last week saw a healthy amount of traffic.

The company, which has annual revenue in the nine-figure range, received essential business status allowing it to stay open while many other competing businesses were forced to shutter, thus allowing it to sell to consumers in-store, in addition to a live chat feature on its website, by phone or video call on Zoom.

Unlike some retailers in the market, the company has not resorted to markdowns or promotions to woo buyers.

The last week of March saw an essentials marketing campaign rolled out, to play up the different purchasing channels.

While marketing spend is higher than the year-ago period, it’s in line with what the company budgeted for 2020, Riddle said.

As California now readies for a phased re-opening of business, which began last Friday, Howard’s is ready with a game plan that had already been set in motion to keep it relevant to a shifting consumer base.

A new, 22,000-square-foot showroom in the Long Beach community of Marina Pacifica on Pacific Coast Highway is still on track to open in July.

The company’s Glendale and Huntington Beach stores, meanwhile, are expected to see remodels in line with the company’s desire to elevate the in-person retail experience.

Consumers for the most part still want to see products such as vehicles or a refrigerator in person before making a purchase, Riddle said, which is why Howard’s showrooms are focused on getting people to stay.

“As we move into phase two of COVID-19 and some relaxation to the stay-at-home rules, I think people will still be going into the showroom to be able to see the product,” Riddle said.

“What we’re seeing right now, the appliance industry is divided into two segments: 63% is replacement or desperation [buyers]. The balance of that is discretionary [purchases]. During COVID-19, what we’ve seen drop off a lot is the discretionary purchases.”

When people go back to shopping, Howard’s showrooms emphasize live-product vignettes, hubs for partners to play up their product and in-store kiosks.

Howard’s currently has a big share of the baby boomer market and some Gen Xers. The key now is growing its base of millennials.

“When I was growing up, working in the industry, the most common sales would be someone comes in and says ‘John, my washer failed.’ If the dryer was still working, in most cases, the customers didn’t replace the dryer until it failed,” Riddle said. “It could have been a different color. With millennials there is a very strong dedication to make sure there’s a match of brands and styles and design and so forth because so much of the home is geared towards entertaining in the kitchen.”

With big name competitors, such as Sears, closing and leaving behind real estate, Howard’s is in a good position to expand, Riddle said.

While the company—founded in 1946 by Howard Roach, who began repairing radios in the back of a San Gabriel sporting goods store—doesn’t have a target number it wants to grow its store base to, the fleet will expand to serve markets where it’s already delivering but just doesn’t have a physical location, Riddle said.

The CEO added: “For us, what we see is the growth opportunities.”