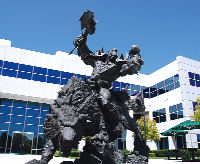 Blizzard, whose “World of Warcraft” series has made it the largest online game company, struck a deal to occupy the nearby empty buildings.

The buildings total a little more than 100,000 square feet.

The space is set to be ready for Blizzard by the end of the year, according to contractors working on the low-rise buildings.

The company moved into those buildings—the former home of chipmaker Broadcom Corp. —in 2007.

Blizzard is the county’s largest software maker with $1.3 billion in yearly sales. It has more than 1,100 local employees.

The company’s fantasy-themed games are played by millions over the Internet.

After some two years of little growth for Blizzard’s core “World of Warcraft” game, company officials said last month they are starting to see an uptick.

Blizzard now counts 12 million players of “World of Warcraft,” up from a previous peak of 11.5 million at the end of 2008.

Subscribers pay about $15 a month to play the game.

Growth seems to have been kick-started by September’s launch in mainland China of the latest expansion of “World of Warcraft,” dubbed “Wrath of the Lich King.”

Blizzard’s website lists openings for more than 150 jobs in Irvine, including positions for software engineers, cinematic and animation experts, translators and game designers.

Which Blizzard departments will move to the new buildings isn’t known.

The company keeps a relatively low profile and hasn’t publicized the expansion, possibly out of concerns about fans of its games seeking out the company.

Likewise, brokers representing Blizzard and the building’s landlord couldn’t be reached for comment. The buildings Blizzard’s expanding into are owned by Irvine’s Sares-Regis Group, according to real estate market tracker CoStar Group Inc.

The new buildings aren’t hidden to the public like those in Blizzard’s iron-gated campus, which has been reworked from its Broadcom days into something that’s part college campus, part fantasy world.

There’s a Blizzard library, museum and a cafeteria with fresh, cheap eats. A giant statue of an orc—a fearsome character from “World of Warcraft”—stands sentry in the quad.

For now, the buildings across the street look like any other Irvine office park.

Blizzard’s lease was the second-largest office deal struck here in the past three months, according to local brokerage data. It’s one of the largest expansions for a local technology company since Blizzard’s last move in 2007.

The company more than doubled its space in 2007 when it took Broadcom’s former space. The chipmaker in turn relocated to more than 700,000 square feet of office, laboratories and other space in University Research Park near the University of California, Irvine.

Other than Broadcom and Blizzard, few technology companies have sought to add office space here in the past few years—one of many reasons the area’s office market now counts vacancy levels close to 20%.

There’s currently close to half a dozen mortgage companies on the market looking for office space totaling more than 20,000 square feet, said Carnahan, whose company worked on the largest office lease signed in the third quarter, a nearly 128,000-square-foot deal in Anaheim signed by short-term lender CashCall Inc.

Sarah Tolkoff contributed to this story.