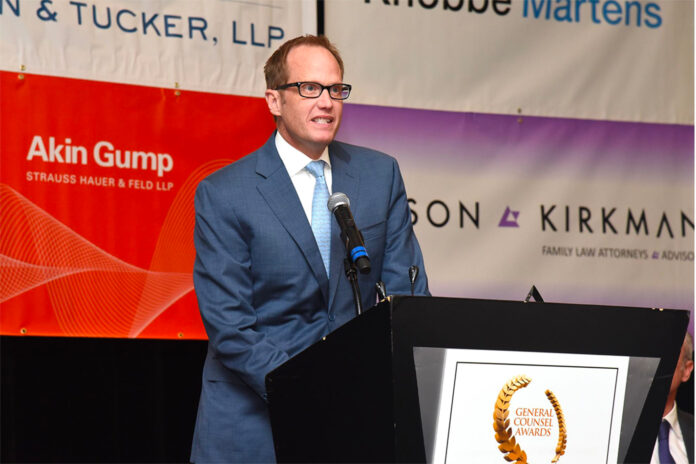 Nate Jensen told the Business Journal last November that while he loved reading about American history, particularly its wars and the Wild West, it was a fictional character who spurred him to become a lawyer.

“I read ‘To Kill a Mockingbird’ and fell in love with Atticus Finch,” Jensen said.

“It’s a noble, and should be an honorable, profession that is practiced among civil people who seek to meet their clients’ needs in as cooperative manner as possible.”

That work received industry plaudits; he was recognized as the outstanding GC of a public company at the Business Journal’s 11th annual General Counsel Awards, on Nov. 18.
On Dec. 13, 2021, Jensen died as a result of a car accident in Long Beach.

“Nate was not only a terrific legal and business mind but more importantly he was a wonderful husband, father and friend,” said Mark Peterson, a partner at O’Melveny & Myers LLP, who introduced Jensen at last year’s event.

“There will be a large hole in the OC legal landscape with his loss,” he said.

“We will miss his intellect, his business acumen, his devotion, and his kindness,” Clean Energy CEO Andrew J. Littlefair told the Business Journal in December. “Not only was he a colleague for over a decade and the ‘Best General Counsel’ as the OCBJ awarded him, but he was a dear, dear friend.”

“Foremost to me is doing everything I can to help my client meet its business objectives. I don’t want to be the Department of No, which is many legal departments.

“I have not regretted for one minute becoming a lawyer. It’s been a fabulous career.” ­­