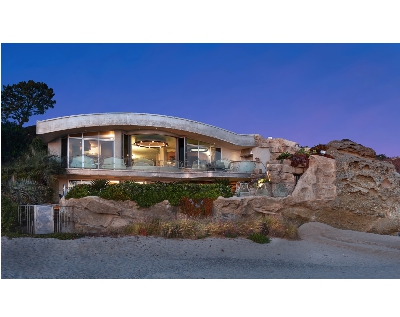 “The sun is free and it provides a lot of energy and light,” the famed architect said during a recent interview.

“That energy starts out warm in the morning and uses the lights in the living and the kitchen area to provide a sense of calm comfort for the start of the day.

“As the day goes on and the sun starts to set in the west, we start to look at the living room and the daylight orientated spaces.”

Jeannette is known as the premier designer of trophy houses along Orange County’s fabled coastline. His work includes iconic properties such as the Rock House in Laguna Beach and the Portabello residence in Corona del Mar, which was featured on the Oprah Winfrey show and sold for $34.1 million in 2010.

He’s sought after worldwide, having designed homes from Saudi Arabia to Budapest to the West Indies.

One of his newest designs, called Aerie, is a seven condo-unit project on a bluff overlooking the entrance to Newport Beach harbor on the Corona del Mar side.

The condos, ranging from 3,000 to 6,500 square feet, have open floor plans and oversized windows to take advantage of views that range from Catalina Island to Laguna Beach.

The homes, which each expected to cost $10 million or more and will be completed in about six months, have access to a private cove and docks, and will share a pool, spa, large fitness center and “sand dollar lounge.”

“The project looks like it’s a part of the natural landscape,” said Paul Julian, whose Irvine-based Advanced Real Estate Services is developing the project and selling the condos.

“Brion was able to take a unique piece of property and maximize the incredible traits that is has—the views, the sunlight—without it looking like it is overbuilt for the area.”

Jeannette, who grew up in Downey, graduated from the University of Arizona where he nourished an interest in green design. He opened his firm in 1974 in Newport Beach. His business partner is Bonnie Jeannette, who is also his wife.

From the very beginning of his business ventures, the designs were always intended to be “eco-friendly and healthful,” Jeannette said. He didn’t allow the price of materials to determine the design. He focused on elegance, such as materials sourced from Ceasarstone and includes handwoven rugs, carved Kachinas, as well as famous art from Italy and France if it suits the ambiance.

Jeannette likes to have a bit of fun in his estate designs, such as an elevator emerging from the floor in a glass cylinder in the center of one home.

He began focusing on sustainability years before it became a buzzword, incorporating items like concrete with fly ash additives for reusability and products certified by the Forest Stewardship Council. In fact, he helped craft California’s laws for building on the coast.

“Brion is considered the ‘go-to’ architect for difficult/challenging sites; whether on the coast requiring stringent governing agency approvals, or on environmentally sensitive sites,” Bonnie said.

“He not only works for successful approvals for his clients, but he advises other architects and assists attorneys who often seek his expertise.”

He and principal architect Amy Creager believe there is “wisdom” in starting the designs with hand-sketched concepts before switching to computers for detailed analysis.

He charges about 8% to 10% of a project’s construction costs, which can run from $350 to $600 per square foot. Jeannette has kept his firm purposely small, with about 10 professionals, he said. He prides himself on his willingness to do extensions and renovations, including those of clients whose homes he designed 30 years ago.

The Business Journal this week features its annual list of the 29 biggest architectural firms in Orange County who reported annual OC billings of at least $4 million (see list, page 25).

In Jeannette’s online portfolio are 120 of his best designs. Other well-known OC homes designed by Jeannette include the Gucci house in Aliso Beach and the Slack Residence in Corona del Mar.

He is known for the “aerai” curvilinear design, which he said is “very expansive.” The term aerai is Italian for a sense of open spaces and ventilation.

One of Jeannette’s most famous estates is Cameo Shores’ Portabello estate, which was inspired by a nautilus shell. The 23,000-square-foot house doesn’t have a straight line; instead, it relies on rounded walls of glass and rounded seams on limestone floors.

It also has its very own website showcasing all of its unique attributions, including a bowling alley in its expansive basement.

There’s also the Rock House in Laguna Beach. The beachfront home, built on a rock, has interior moldings and tables built in Jeannette’s signature curvilinear fashion. The palette consists of soft ocean blues, grays, and light beiges—analogous to the sand at the base of the sea that the home overlooks.

It’s been referred to as the most architecturally significant home in the beach city; it sold for $7.2 million about two years ago.

A current project underway is an estate on Balboa Island.

“It is a contemporary home, and it’s upside down because the bottom floor looks more like a street view and the second floor is a bit nicer” with a view of the ocean, he said.

The 7,000-square-foot estate will feature an automated subterranean garage that can hold up to nine vehicles. The automated system will essentially park the vehicles itself to maximize space and efficiency.

Jeannette has worked on more than 1,200 projects that he’s seen through construction. What separates Jeannette from other architects is his deep involvement in the construction phrase, Bonnie said.

“He works closely with the builder and the client, acting as the client’s liaison with watchful eyes to see that what was intended is achieved,” she told the Business Journal via email.

“His goal is to see that the integrity of his design and the quality of the construction techniques and specifications he incorporates into each home are achieved through construction.”

He’s not fixated on a particular design style and will work with styles from Cape Cod classics to Zen-inspired Asian constructs.

Among the designs of Jeannette online portfolio are a few treasures that are peppered across the globe. A rendering of a Tuscan-inspired Saudi Arabian estate outfitted with a loggia, mall lawn, and horizontally shaped swimming pool across almost half of the backyard, can be found alongside another rendering for a home in the West Indies. Another, in Budapest, sits among other local renderings for Dana Point and Corona del Mar.

Each home is its own version of a certain style. The Zen-inspired designs don’t merely serve an appreciation for the style, but rather, Jeannette redefines it in the new context of the home and the space with the sun as his guide for the palette to present itself—and then he begins.

Then there is the most important feature.

“All of our homes are filtered with the sun.”