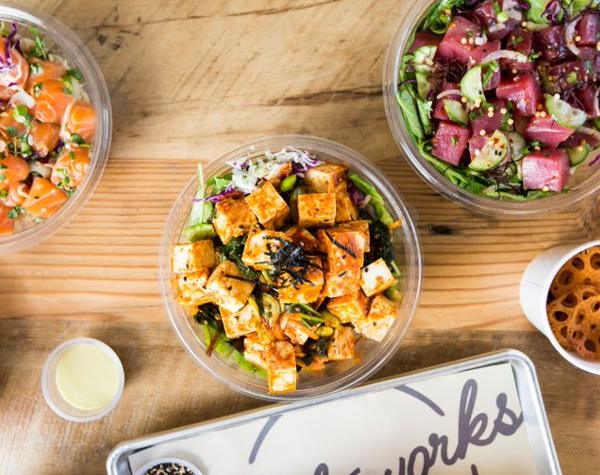 A race is taking place on the mainland to get the Hawaiian dish of poke to be as ubiquitous as a Big Mac, and Irvine-based Pokéworks is vying for first place.

The seafood dish—consisting of chunks of raw fish spooned over rice and topped with any assortment of sauces—is a growing concept. IBISWorld says the sector generates $1.3 billion in U.S. revenue from poke mom-and-pop shops and a growing number of chains, many of which  are looking to ratchet up their presence through franchising.

Pokéworks is looking to do just that, under the leadership of newly appointed CEO Steve Heeley.

In August, he succeeded Pokéworks co-founder and now Head of Culinary Mike Wu in the CEO position.

Pokéworks currently has more than 60 restaurants open, with another 75 in the development pipeline and expected to open by the end of next year.

It has local spots in Irvine’s Culver Plaza and Laguna Niguel’s Ocean Ranch Village, with a Ladera Ranch coming soon.

Franchisees generated median gross sales per restaurant of $613,820 in 2020, according to the company’s franchise disclosure document.

The company declined to provide its annual revenue citing its privately held status.

“I don’t like to quote a hard [growth] number, but what I can tell you is we want to be the leading poke brand in the U.S. and worldwide,” Heeley said.

“We went from zero to 60 in five years. There was a COVID year where growth slowed, but even during COVID we had franchisees open restaurants. We see this as a play to be the leading, most trusted premium fast-casual poke brand,” Heeley said.

Research firm IBISWorld projects the U.S. poke industry to grow revenue at a rate of 2.1% annually between 2021 and 2026, with increased interest in health among Americans helping drive sales.

That should translate into an 8.5% increase in restaurant locations to 3,643 between the same period, the research firm said.

The Pokéworks story very much mirrors this, with the company’s original start in Manhattan.

“It was a very humble, tiny storefront,” Pokéworks co-founder and Chief Development Officer Peter Yang told the Business Journal late last year. “We opened on Dec. 13 when pretty much half of Manhattan had left for the holidays. We had a couple people come in and say ‘What is that? What are you guys selling?’ No one knew what poke was at the time.”

The lines out the door continued to build at Pokeworks when New Yorkers returned to the city after the holidays.

“It was around the end of 2016 when we realized poke is not a fad. It’s not a trend. It’s something that would develop into its own category,” Yang went on to say.

“The market’s there, and so we want to have intelligent growth and partner with great franchise operators. It’s not an oversaturated or over penetrated category in fast casual. Our plan is to scale our growth now that we have more certainty in the marketplace and now that restaurants are open again,” he added.

The Pokéworks business is back to pre-COVID figures, according to Heeley.

To accelerate the growth, the company went on a March hiring spree that bolstered its C-suite with Heeley and Chief Development Officer Larry Sidoti. The company also made Michael Walters permanent chief operating officer after he previously served as interim COO.

Last year saw a big investment and push into digital, like many companies, that helped offset the losses from the restaurant closures with delivery and online ordering.

Guests, the CEO said, are now coming back to eat in restaurants.

“The good thing about COVID, if there is a good thing about that period in time, is a lot of consumers that had not adopted digital ordering as a behavior were forced into adopting digital and third-party delivery. Now that behavior’s built in. So that’s the upshot is that it brought a whole new group of consumers into ordering digitally and becoming competent about ordering digitally that they may not have otherwise been incentivized to do,” he said.

Most Pokéworks restaurants are seeing at minimum 50% of sales generated through digital, according to Heeley. The mix varies by location with those in more dense, central business districts seeing higher digital percentages.

“The trend was already happening prior to COVID, so I think today’s consumer, particularly if you’re looking at Millennials and younger, the whole idea of shopping online, whether it’s Amazon or restaurants, it’s this idea of ultimate convenience and ease of ordering.”

That shift is one of the reasons the company earlier this year rolled out a prototype drive-thru concept, called the Cruise-Thru Lane, beginning with a restaurant in Knoxville, Tenn.

“Guests want it how they want it, when they want it on demand. So, whether that’s drone delivery or subscription models, digital sales at restaurants are going to continue to build and accelerate,” Heeley said.

“Those companies that adopt those practices of how the consumer defines convenience will be the ones that continue to win.”

In the near term, lingering uncertainties around COVID and variants of the virus remain. However, Heeley doesn’t see that as having a sustained impact on the business.

“I think the big one that everybody’s wrestling with is what’s the ripple effect of the continued challenges of COVID as we move forward and what’s the government’s response,” he said.

“It’s this uncertainty in the marketplace. How’s that going to change how people think about using restaurants. Even though the digital behavior’s built, most restaurants still rely on dine-in to sustain business. So that’s the top line that everybody’s struggling with.”

There’s also pricing and sourcing challenges businesses have to contend with, as food prices rise and products – particularly packaging – shipped from overseas sit on container ships at the ports.

“Inflation is certainly happening on commodities and I think most restaurants are seeing that and the consumer’s seeing that in the grocery store. There have been a lot of impacts to the supply chain,” Heeley said.

While the company has had to occasionally alert guests to shortages of some menu items—say the masago, or Capelin, fish egg that’s seen the harvest decline and cause prices to double or triple—Heeley said that’s not something the company’s had to do often.

Plus, he said, consumers have already seen the inflation set into other aspects of their day-to-day to the point, the reality’s not shocking.

“As a premium brand, we’re not going to compromise our quality,” Heeley said.

“Most of our consumers understand that we’re not taking price for profit; we’re taking price because of these escalations in the product cost. If we weren’t a premium brand, I think it would be a little different, but we’re not going to cheapen quality just to keep prices down.”

Pokéworks CEO Steve Heeley, as the company’s former head of marketing, knows the consumer base well.

Pokéworks has historically relied on speaking to its consumer digitally.

“I think in today’s environment, most marketing is done digitally. The old school way of using traditional media, whether it’s print or radio, they’re not cost effective and it’s really difficult to pinpoint and reach your target consumers,” Heeley said.

That has meant reliance on social media and other forms of digital marketing, he added.

“Part of our consumer focus is very heavily millennial and Gen Z and that’s how those consumers consume their content and messaging from brands,” he said. “Most of our marketing efforts are aimed in the digital space because it’s just the most effective way to reach consumers, whether it’s engaging new consumers, whether it’s communicating to our guests new offerings and also articulating our brand and differentiating our brand, social media’s a very effective way to do that.”

“For us, it’s about engagement. Once we get somebody in the door or we acquire a guest digitally, then how do we engage that consumer? How do we listen to that consumer to make them more frequent guests?”

Management thinks Pokéworks has a strong digital channel to keep them hooked.

“We had already been innovating and developing a pretty good digital ecosystem and that allowed us during COVID to pivot pretty quickly. We’re continuing to evolve that and upgrade our technologies,” Heeley said.

The company’s exploring how to leverage tech for its loyalty program, labor productivity and speed of service. It’s also looking into how robotics and artificial intelligence could help on the marketing and customer service side.