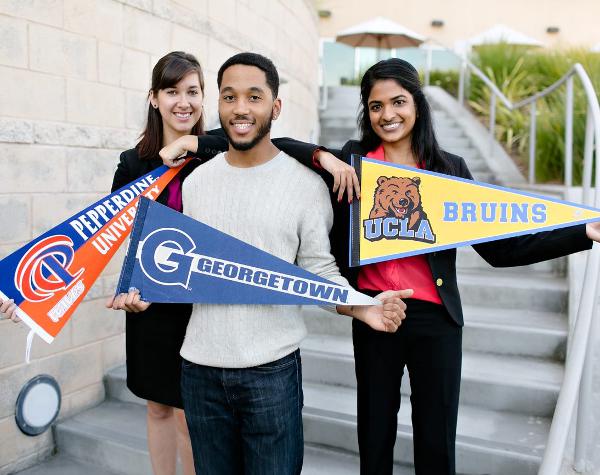 Just ask Tiger Woods, the founder of Irvine-based education-focused charity TGR Foundation, where McKee has been the chairman of the board of governors for more than a decade.

“Mike has always had a passion for helping kids chase after their dreams. He’s been a significant part of my foundation’s impact,” Woods told the Business Journal.

During his tenure at TGR Foundation, McKee has helped create and grow the foundation’s flagship educational facility, he’s mentored and sponsored a student throughout college, and has provided seed funding for a new initiative that aims to pair students with local companies in internship opportunities.

“It’s been incredibly rewarding to be a part of an organization that has had a positive impact on more than 2 million kids,” McKee said.

McKee, a longtime resident of Laguna Beach, was approached to join TGR Foundation in 2004—when he was still with Irvine Co.—by the chief executive of the charity at the time, Greg McLaughlin, who was reaching out to local business leaders to help establish the organization’s new learning center in Anaheim.

The county leased out the site’s land to TGR Foundation for a dollar per year, and together with Woods, local partners stepped up to help fund the $22 million construction of the school, which opened in 2006.

The 35,000-square-foot facility “is the flagship of programming for the foundation,” notes McKee, who became chairman three years after the school’s opening.

TGR Foundation, now in its 25th year, focuses its funds on education programs.

That changed last year, with the pandemic halting events save for the two PGA Tour events.

Thanks to a broad fundraising base and the backing of Woods, the foundation was relatively unscathed, with north of $100 million in reserves.

“We’re very blessed to have the kind of exposure and access to the corporate, sports and entertainment community that we do,” McKee said.

The organization uses these funds to sponsor the charity’s main priority: supporting education and career growth for disadvantaged youth.

It does this through three primary initiatives.

The first is educational and other enrichment programs at the TGR Learning Lab in Anaheim, such as after-school STEM programming for middle and high school students.

These classes switched to a digital format after the onset of the pandemic, with “over 200 different learning segments available online for free.”

The program has worked with over 800 teachers, McKee notes, with many implementing TGR Foundation’s resources in their normal classroom.

In a second key initiative, dubbed the Earl Woods Scholar Program, TGR Foundation provides 25 students each year with a full college scholarship, focusing on students from challenging backgrounds, or those lacking financial support.

McKee’s mentee was Evan Chang, “the child of a single mom and from a modest background, but was a mature young man with great promise,” McKee said.

Chang ended up going to medical school at NYU, and now is an anesthesiologist at Kaiser Permanente.

“Mike was like a father figure to me during my college years,” Chang said.

“He was always accessible for a chat to provide advice, whether it was academic, networking, or even a personal relationship matter. I attribute much of my eventual success as a practicing physician anesthesiologist to my mentor mentee relationship with Mike.”

TGR Foundation’s mission, to “empower students to pursue their passions through education,” ties into a personal passion for McKee, who devotes a bulk of his not-so-free time to create opportunities for others in the Orange County community.

McKee and his wife, Cindy, have gifted several million dollars to TGR Foundation to support its initiatives, including the third, and newest, initiative called Pathways Forward.

It kicked off last year following the appointment of Gordon McNeill as the new chief executive, and aims to give students business skills to help them in their future careers.

Credit reporting giant Experian of Costa Mesa and Genesis Bank are examples of companies that have signed on to provide training to these students. Nick Gross’ Find Your Grind and Walter Cruttenden’s Learn & Earn are also key partners.

“We are recruiting companies that will provide classes, internships or mentoring opportunities to help train students in a specific skill set, and help them better identify what they want to do,” McKee said. “We hope to have 30 to 40 companies signed up in the next two years.”

McKee left Irvine Co. at the start of 2009, and would later serve as CEO of another big real estate firm, Bentall Kennedy U.S., until 2015.

He still counts many positions in the business world. He has been a principal at Contrarian Group—Peter Ueberroth’s Newport Beach-based investment and private equity firm—since 2018.

Prior notable boards for McKee include the Donald Bren Foundation, Hoag Hospital Foundation and the Lusk Center for Real Estate at USC and Healthpeak Properties (NYSE: PEAK), formerly HCP Inc., where he served as executive chairman until 2018.

“My life has changed in the past two years because I’m not running a company, but I still want to be as involved as possible in the community,” McKee said.

“My nonprofit work allows me to give back.”