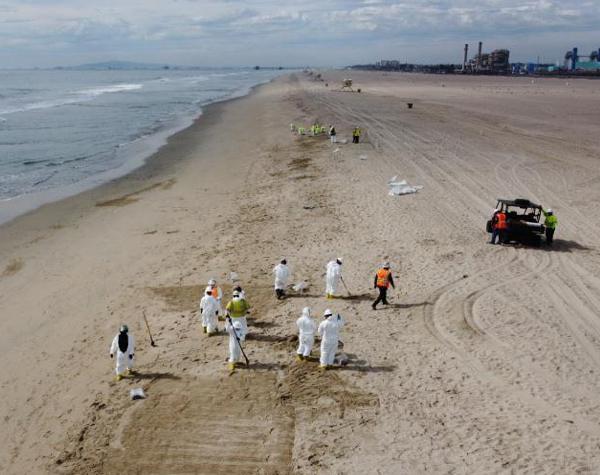 The region’s hospitality industry, already in a weakened state from the pandemic, has also taken a hit.

“This has been devastating to our land and to our businesses,” Orange County Supervisor Lisa Bartlett told the Business Journal.

The most notable cancellation last week was the Pacific Airshow, the nation’s largest airshow by attendance.

The city of Huntington Beach canceled the Sunday leg of this year’s three-day event, slated to run Oct. 1-3, as officials worked to mitigate the oil spill that appears to have started on Friday.

Airshow officials said 1.5 million people saw the show from Huntington Beach on Saturday alone, breaking attendance records. The event is estimated to have a local impact topping $100 million, according to airshow officials.

“We were all set for another record-breaking day when the call came in,” Airshow Director Kevin Elliott said in a statement.

The cancellation lost the city and county a “significant amount of business from the spectators that watch the event and spend time in the neighboring communities,” notes Bartlett, who represents the fifth district.

The Sunday airshow was to serve as the main event for a gathering hosted by Whittier Trust, an investment and wealth management firm with offices in Newport Beach. It invited about 100 friends and clients to observe the airshow from the rooftop of the Waterfront Beach Resort along Pacific Coast Highway.

“I found out at 6 a.m. that the airshow was canceled,” said Whittier’s Executive Vice President Greg Custer. “We had to pivot quickly.”

Whittier decided to still hold the event for those still interested. It worked with the Waterfront hotel to renegotiate some terms of the deal it had, given the expected smaller attendance.

“We called it the lemonade party. When life gives you lemons, make lemonade,” Custer quipped.

About 60 people ended up attending the event at the hotel, which also faced cancellations as a result of the airshow being halted.

Hotels are becoming experts at dealing with unexpected events throwing wrenches into business plans, with the recent pandemic forcing the hospitality industry to adapt and adjust to dropping occupancy levels and new regulations.

The 437-room Surf City hotel “was fantastic to work with, and worked with us to make sure we could still hold the event,” said Custer.

The airshow viewing party turned into a beach cleanup watch party, which encouraged several of the attendees to donate money and resources to the ongoing effort, Custer notes.

OC’s tourism industry will undoubtedly suffer from the spill, “mostly beach cities but other cities to a lesser extent,” said Raymond Sfeir, Professor, Director of the Anderson Center for Economic Research, and the A. Gary Anderson Chair of Economic Analysis at Chapman University.

Sfeir notes that the economic damage could have been much higher if the spill occurred during summer.

“Hotels and restaurants may see some impact. It all depends on how quickly the cleanup is done. The faster it is, the lower the impact,” he said.

Huntington Beach’s local tourism economy faced the worst of the spill in the past week, though effects are quite literally leaking into neighboring beach towns.

“Almost the entire Orange County coastline is shut down, and we don’t know if that will be for three days or three months,” Bartlett said last week.

As of late last week, all harbors and beaches from Huntington Beach to Dana Point were closed to the public. As a result, whale watching tours, fishing charters, and the Catalina Express ferry to Catalina Island were canceled out of Dana Point’s harbor last week.

The Catalina Express was operating normally from the ports in Long Beach or San Pedro as of late last week.

One of Dana Point’s larger events, the Ohana music festival, ended just days before the beach’s closure, but other upcoming crowd-gathering events in OC’s beach cities may be facing cancellations or postponements, depending on the pace of cleanup efforts and the severity of the leak.

The impact of the spill will be “local as opposed to countywide,” said Chapman’s Sfeir.

“Beach cities from Dana Point to Huntington Beach will be affected directly. With the closure of beaches and harbors, those who will be most negatively impacted are: fishermen; stores along the beach areas; businesses that provide sports fishing, boats rides, and whale watching; those who give surfing lessons; city revenues will go down due to lower sales taxes and parking fees collected.”

Some businesses that provide work for the cleanup of the beaches will benefit. Also, “when people do not spend their money in beach cities of OC, they will spend it elsewhere. So, entertainment businesses will benefit,” he said.

Current estimates place the spill at 126,000 gallons, or about 3,000 barrels of oil. Reports late last week suggested the spill could turn out to be less than that amount.

Officials said as of Thursday that about 5,500 gallons of oil had been recovered from the water and 12,160 feet of floating containment barriers has been deployed.

Some 1,500 people were expected to be supporting the cleanup efforts by the end of last week.

The last major spill in the region was nearly three decades ago near the same spot at the current spill. That leak spilled about 400,000 gallons of crude oil.

The latest spill is smaller than the 1969 Santa Barbara spill of 4.2 million gallons.

Kevin Costelloe contributed to this report.