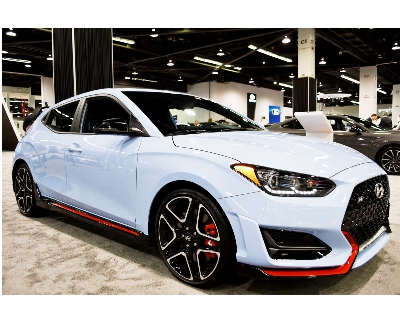 Hyundai rhymes with Sunday, sported a return-your-car-if-you-lose-your-job policy during the Great Recession, and at one time promoted a 24/7 product strategy—that is, seven model launches in 24 months.

These were all largely mechanisms of the past to get consumers to better understand Hyundai, which translates to “modernity” in Korean.

The efforts have paid off, with the automaker coming a long way from having to inform the U.S. market of how to even say its name. Parent Hyundai Motor Co. of Seoul reported U.S. September sales of 56,000 vehicles, up 20.2% from the year-ago period. The figure includes Genesis sales, which account for a small percentage of the total.

There’s still work to do to push ahead, however, its execs say.

Hyundai Motor North America Inc. is now led by the newly installed CEO and President José Muñoz, who bluntly told trade publication Automotive News not long after his April appointment that “we want to elevate the brand to where it belongs, which is at a much higher level than it is today.”

That assessment means changes are in order, according to Chief Operating Officer Brian Smith.

“Our company is changing. It’s not just people’s perception of the brand. We’re changing.

“Our dealers are changing as they start to represent this very robust product lineup and this incredible technology. It’s a big move for the brand and for the company into what’s very mainstream in the United States auto industry. It’s not just product. It’s not just marketing,” said Smith, who is leading the marketing team on an interim basis following last week’s resignation of Hyundai Motor America Chief Marketing Officer Dean Evans.

The hard-charging Muñoz, who also holds the title of global chief operating officer at parent Hyundai Motor Co., was in the midst of heavy travel and unavailable for comment. He came from Nissan North America where he was chief performance officer and chairman.

His charge to elevate the brand is not unlike what others have said before him, most notably former CEO John Krafcik, who is credited with making several significant strides for the automaker in more recent times.

The company, under Krafcik’s watch, spewed out a raft of new designs and models, along with an Assurance program during the Great Recession that promised to take back cars if buyers lost their jobs. It won people over, with Krafcik telling the Business Journal nearly a decade ago, “We’ve moved from a value brand to a valuable brand.”

Krafcik left in 2013, followed by a string of successors: David Zuchowski, Kyung Soo Lee and then interim head William Lee. Still, Hyundai has all the while continued to inch forward, with a U.S. market share currently sitting at about 4%, according to a third-quarter report from Kelley Blue Book.

For the last two years, the brand has been in the top three with sister lines, Genesis Motors North America, which earlier this month named former Audi of America President Mark Del Rosso to the top spot; and Kia Motors America, in J.D. Power Awards’ initial quality ratings, which is based on feedback from new car owners.

Of note is the Costa Mesa-based ratings firm’s indication of a continued widening gap between the South Korean automakers and their peers when it comes to infotainment and electrical systems.

And perhaps this is where, for Hyundai, it takes its next leap forward.

“Hyundai has been here [in the U.S.] for a long time. They were products coming from Korea that were new and people didn’t necessarily associate automobiles with Korea at the time, in the mid-80s, when Hyundai first arrived on the shores,” Smith told the Business Journal in an interview from his office at the company’s Fountain Valley camps.

“Their positioning as a company at the time was really low cost and that’s what people thought of when they thought of the Hyundai nameplate and Hyundai brand. Over time, the company’s grown to be so much more in terms of product capability.”

Smith said it was the technology that pulled him to Hyundai, when he jumped to the company two years ago.

“The technology is so good compared to most other products, import or domestic, and I was a little surprised. Then I realized, I really shouldn’t be,” Smith said.

“Companies like a Samsung or LG are all based in Korea, so the fact that Hyundai products have this incredible technology shouldn’t be a surprise to anyone, and what’s evolved over those 30 years is the vehicles are still perceived as great value because we’re not the highest priced in most segments, but we clearly have the most content, whether it’s technology or just quality that’s built in.”

That the South Korean automakers—from luxury badge to entry level—were called out specifically for their charging ahead of the pack on quality among domestic and imports by J.D. Power is a step, but do Americans automatically think high tech when they think Hyundai?

Smith said no, but the company is working to change that on the product side in a bid to address brand perception, but also longer term considerations.

As industries mull how ride-sharing and autonomous vehicles impact the future and also overall mobility, particularly in urban areas, Hyundai, too, is thinking about solutions with electrification and the hydrogen-powered sport utility vehicle, the Nexo.

The company is also putting in research to see how its vehicles could be improved specifically on the ride-sharing front—making backseat materials more durable, for example, for those Uber or Lyft passengers getting in and out throughout the day.

The Hyundai lineup, at one time heavy on the sedan side, has also morphed with the injection of more SUVs and crossover vehicles. That includes the eight-passenger Palisade, the Kona, and before year’s end will be the Nexo. All are helping the company catch up with the rest of the industry, which has already shifted to meet consumer love for the crossover.

“It’s been rapid growth and a rapid shift, something I don’t think we’ve seen in the industry before as people have migrated from sedans toward crossovers,” Smith said.

The COO noted less than 50% of the company’s sales around this time last year were in the crossover space, while the industry had largely moved to mid-60% crossovers.

That’s now changed in the last couple of months, Smith said, with SUVs having climbed to about 60% of overall sales for Hyundai.

It’s not quite at the industry’s 70% range and Smith isn’t sure it’ll get there, because Hyundai is also not getting out of the sedan business. That’s unlike companies, such as Ford and GM, which have said they’re phasing out or reducing their sedan offerings.

To that end, what happens on the retail side with brick-and-mortar dealerships and interesting partnerships for more experiential events with the likes of companies such as Live Nation become all the more important to continue selling the Hyundai story, Smith pointed out.

“When you talk about brick-and-mortar, a lot of people wonder what’s the future of automotive when you can do so much research online now?” he said. “‘There’s a number of great examples of big industries that have been able to leverage a digital experience for people to then seamlessly move into the offline world. That’s really one of our focuses right now.”

Even though the technology exists today, very few people say, “‘I feel comfortable about all my research done online. I know exactly the product I want and the way to finance it and do the trade from my phone, and I just want the vehicle to show up at my house.’” The fact that the technology exists is great. For most people it’s not going to be their choice.”

Leveraging technology, electrification of the fleet, hydrogen-powered vehicles and high-tech infotainment systems. These are conversations a long ways away from the days of big incentives, value and how to say Hyundai.