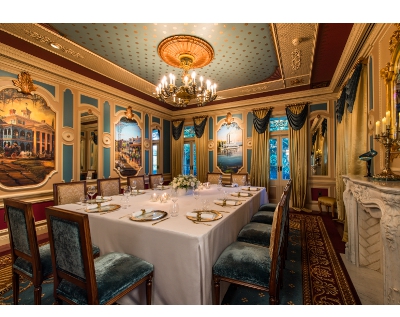 Disneyland Resort has evolved to become an epicurean mecca for those looking for a fun yet serious dining experience.

The mastermind behind Napa Rose in Disney’s Grand Californian Hotel & Spa, the elegant Carthay Circle at the California Adventure theme park, and Club 33 in Disneyland’s New Orleans Square, has now outdone himself.

But his crowning achievement is 21 Royal, a unique private-group dining experience that opened at Disneyland last year.

The restaurant provides up to 12 guests a luxurious experience in a 2,200-square-foot house.

The price also includes tickets to the theme park, and a few other VIP perks.

Walt and Lillian Disney began designing the space about 10 years after the park opened. “Walt needed something bigger than the firehouse apartment,” said 21 Royal Sommelier and Project Manager Matt Ellingson, alluding to the famous 500-square-foot “secret” hovel above Main Street Fire Station. But after Walt died in 1966, it was left unfinished for decades until Walt Disney Imagineers completed the plans.

It’s named for its address in the park’s New Orleans Square near Disney’s members-only Club 33 at 33 Orleans Ave.

Ellingson oversaw the renovation and reopening of Club 33 in 2014.

“The fact that this is a home is a completely different feel, even in a house or private dining room, this is outside of that.” Ellingson said. “It’s a unique intimate environment for guests to spend time with one another. Relationships are everything, forged and formed in time and in moments. A group of people get to spend an intimate evening and forge a memory or form plans for the future.

“I’ve seen our guests lose themselves in their home for the evening.”

More Than a Dining Club

“Guests might think of this as a dining experience,” said Disneyland Park Vice President Kris Theiler. “They’ll be surprised—it’s so much more.”

Ellingson said, “We’ve been compared to 3-Star-Michelin Experiences, but reactions are much more intense.”

The Anaheim native thinks that over time the business community will see 21 Royal for the same opportunities it credits Club 33 with. “It’s envisioned for any sort of special occasion or milestone for a dozen people.” Ellingson said. “We’ve had people host clients and partners … and there isn’t anything like this as an experience—and of course it’s ridiculously fun to see a businessman with the tightest of ties cheering for Mickey Mouse.”

There are no more than 12 available nights per month, normally including a Saturday. The marketing has been deliberate and targeted: devotees of luxury-lifestyle magazines like Robb Report, or principals of a big medical convention in Anaheim.

“We haven’t spoken much about 21 Royal … It’s been more on a personal side of things,” Ellingson said. “We’ve had a few companies come through and come back. As word gets out, it’ll appeal to more and more businesses.”