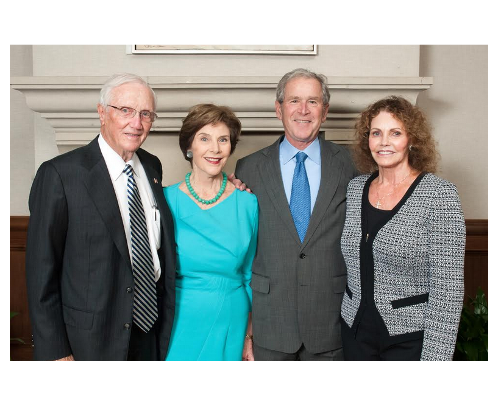 The 87 year old, was a husband, father of three, and influential in local business, political and philanthropic circles—a presence in Orange County for more than five decades whose absence will likely be felt in each of those areas.

“He learned Russian and was involved in communications,” his eldest son, Richard Dykema, said last week.

Dale Dykema served four years in the Air Force, leaving as a staff sergeant, then earned a bachelor’s degree at Calvin College in Grand Rapids in 1956 and an MBA from the University of Michigan in 1957.

That year he moved to Southern California.

“He decided this was the place,” Richard “Rick” Dykema said.

“My dad was known by a lot of people in Orange County,” said Rick Dykema, the long-time chief of staff for U.S. Rep. Dana Rohrabacher, R-Huntington Beach. “One experience I regularly have when constituents visit our office in D.C., invariably they say, ‘Oh yes, I know your dad—he’s the nicest man I know.’”

Rick has worked in politics for 40 years, and Dean and Dawn run businesses—together covering two of their dad’s primary passions.

“He was involved with so many different things; I couldn’t keep track of them,” Rick said.

“A passion he had both before and after retirement was travel,” his son said. “His most recent trip just this past May was to Peru, including Machu Picchu, a difficult trip I would hesitate to take.”

Rick said his father had been ill recently and was at UC Irvine Medical Center in Orange in mid-June, unable to attend a Republican Party of Orange County event at Hotel Irvine where Dale Dykema was to get a lifetime achievement award from the group, which Rick accepted on his dad’s behalf.

“He called me … before the event [and] knew he wouldn’t be strong enough,” Rick said.

That puts the total he launched even higher—because not all of them panned out.

“He was involved with starting businesses most of his career,” Rick said. “Sometimes it worked; sometimes it didn’t.”

The bug first bit when he began a stint with Title Insurance and Trust Co., known as TI and later as Ticor Title, now part of Fidelity National Financial Inc., based in Jacksonville, Fla., but long part of OC’s business community.

“Even early on he was investing in different things—hydroponic tomatoes, blueberry farms,” his son said. “He was always trying something new.”

He ran it for 52 years and sold it in October to First American Financial Corp. in Santa Ana. A price wasn’t disclosed but is believed to be about $10 million.

Dykema had recently taken stakes in new ventures, including Luminara Worldwide LLC near Minneapolis, which makes a flameless, battery-operated candle with licensed Disney Co. technology, and Irvine software firm and consultant Cloudify Inc., where he was also board chairman.

“People like him are few and far between,” said Evan Jafa, Cloudify’s founder and president. “People aren’t always aware of how many businesses and organizations benefited from being associated with him.”

Many local politicians learned and benefited from Dale Dykema, as well. Curt Pringle was the last Republican Speaker of the California State Assembly. He admired Dykema as a “Republican voice but not a harsh voice. He was both supporting and supportive of the moderate and conservative wings,” Pringle said. He noted that Dykema helped start the more centrist New Majority but remained a member of the more conservative Lincoln Club, a straddle few OC politicos managed.

“He was calm and steady,” Pringle recalled, “He commanded attention through his control. Dale was reflective of his time, a time of much greater bipartisanship.”

In a statement released by the Republican Party of Orange County, Chairman Fred Whitaker lauded Dykema as, “A champion of minority candidates.”

The lifelong Republican founded the Lincoln Juarez Opportunity Center and sat on the Board of Directors for the Orange County Hispanic Chamber of Commerce.

“He did politics like he did business,” said Rick Dykema. “He appreciated a friendly, engaging personality, whether he was hiring someone or looking for a candidate to support” beyond what candidates believed.

The couple are the 2017 Arnold O. Beckman Award honorees of DiscoveryCube, scheduled to be given by the children’s science museum at its gala in September.

Her tenure as executive director of Lincoln Club overlapped with his chairmanship of the group.

“Dale was one of my first friends when I moved to Orange County, and one of my mentors,” Hales said. “This is heartbreaking.”

She said Dykema had inspired her own personal and professional efforts, and continues to do so.

“He was just amazing,” she said. “Anyone you talk to will tell you that.”