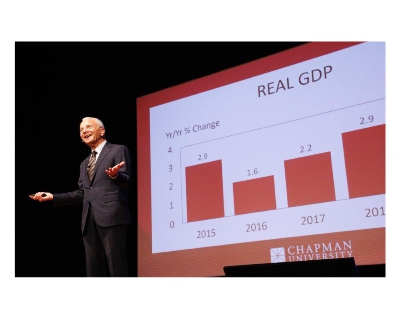 The jobs outlook for Orange County is slowing while the housing sector is headed for modest recovery, according to Chapman University economists.

The hard-pressed homebuilding sector will return to last year’s levels at best, the university’s researchers said in their semi-annual forecast on June 19. Growth in construction jobs and related areas such as financial and professional services “will be muted.”

The county’s information service jobs are at a standstill in stark contrast to Silicon Valley’s growth of 8%, the report said.

They presented their update in the crowded Musco Center on the school’s campus in Orange. Shortly before they spoke, the U.S. Federal Reserve voted to keep rates steady, but signaled a possible future cut that could boost the nation’s economy heading into next year’s presidential elections.

Orange County employment is forecast to grow 1.3% this year, the lowest rate since at least 2014, and will trail California’s already slowing 1.5%.

Lower mortgage interest rates at around 4% will fuel increased home sales and property valuation “during the second half of the year that will largely offset the sharp drop that occurred in the first half of the year,” according to Chapman researchers.

Yet, “the strong growth we’ve come to expect from the construction industry during the current recovery is gone,” the researchers said.

Transportation and warehousing jobs will grow 1.9% this year with professional and business up 2.9%, according to the forecast for Orange County. The number of retail jobs will contract slightly and financial activities employment will slip 0.9%.

During Doti’s presentation, he noted a drop in average number of days needed to sell a home in Orange County.

“Things are getting better,” he said.

He said the county’s median home prices—more than $400,000 above the U.S. level based on 2016 data—are “completely rational” given the area’s median family income, high amenities score, and location along the coast.

Looming above the report were the effects of the U.S. trade war with China. The economists forecast that California will risk losing 43,000 jobs this year alone due to the tensions.

The job losses will increase next year as lower exports and imports “cut into a wide swath of job sectors,” including transportation and warehousing, wholesale trade, financial activities, and professional and business activities.

“A trade war impacts the California economy more profoundly than the rest of the nation as the majority of goods, approximately 90%, pass through the state’s airports and harbors,” Doti said.

The state, he said, is getting closer to “losing its mojo.”

The Chapman economists also returned to a familiar topic—the flight of Californians fed up with high taxes.

“There is a net balance of 150,000 people moving out of the state and we’ve seen more people leaving than moving to California over the last several years,” Doti said. “People are leaving California because of high income and sales taxes, and moving to states like Texas, Florida or Washington, where there is no income tax.”

The economists said Governor Gavin Newsom has argued for the construction of 500,000 housing units per year statewide, but said that number is “preposterous” and a “pipe dream.” The actual number needed is about 130,000 new units annually.

Nationally, Chapman’s forecast sees 2.4% U.S. GDP expansion this year, a reiteration of its initial December forecast. While that is significantly lower than last year’s 2.9% growth, it would still mean “the longest expansion in the history of the U.S.” and keep the country out of a recession.

Doti said the recent slight inversion of U.S. short-term and long-term interest rates, sometimes seen as a harbinger of a recession, do not by themselves signal a slump this time around.

Still, Doti said in his presentation, “things seem to be slowing down.” He said it’s not possible to accurately forecast what will happen beyond this year since there are too many uncertainties.

They added that the Fed’s room to maneuver on interest rates “suggests to us that the economy will continue expanding through 2019.”

Expansion in the presidential election year of 2020 will depend mainly on “whether inflation remains in check or whether it begins to show upward pressure and possibly exceed the Fed’s 2% target rate,” according to the forecast.

The U.S. consumer price index-based inflation rate has been running at 1.8%.