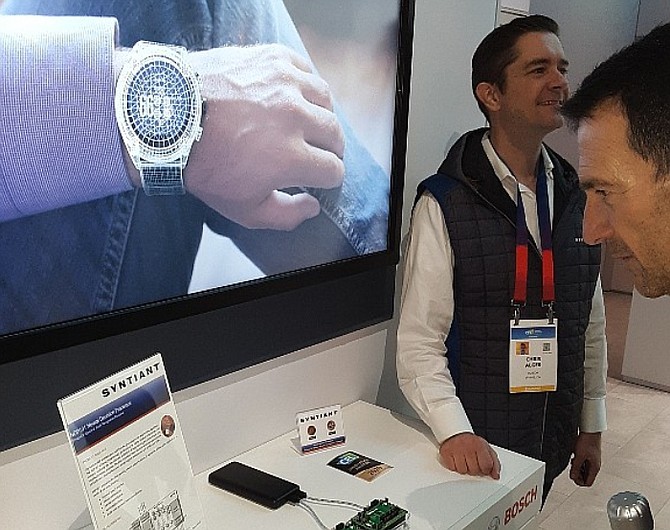 Chief Executive Kurt Busch of Syntiant Corp. in Irvine says his company’s next-gen chips for voice control of electronic devices are the future—and the COVID-19 pandemic has given his views a boost.

“If you don’t have to touch it, then you obviously aren’t going to be picking up any viruses,” Busch told the Business Journal on May 15.

“Our overall strategy is putting voice in devices so people don’t need to touch them.”

Syntiant’s chips respond to voice commands that can wake up a device or have it perform a specific function. They are used to control smartphones, earbuds, smart speakers, laptops, hearing aids and dozens of other smart products.

“We have some customers today that are building things that you used to have to touch. Now they want voice interface,” Busch said.

In fact, a recent survey carried out for the company says more than half of Americans, including a majority of young adults, feel voice control is essential in smart devices post COVID-19.

Here are some of the key findings:

• 87% of Americans own one or more smart devices.

• Generation Z—those aged 18 to 23—are most likely to increase their speech control usage due to the coronavirus.

Additionally, 27% of survey respondents select smart home appliances including thermostats, doorbells and microwaves to round off their top choices, primarily driven by Generation X and baby boomers.

Generation Z and millennials, in turn, prefer their gaming devices and smartwatches to have voice control, according to the survey conducted from April 22 to 24.

Busch said the Caravan survey, conducted by a research and analysis division of the Engine Group in New York, showed that “more than two-thirds of Americans are using voice to control their devices, which is indicative of our own customer growth.”

As the world embraces the fallout of COVID-19, lasting effects from the pandemic indicate consumers will opt for voice user experiences and hands-free interfaces, with Gen Z being most likely to increase speech control usage and baby boomers trailing at the other end of the spectrum.

As for the pandemic’s effects on the operations of his company, Busch says: “It’s certainly slowed things down a little bit,” though it’s “more of an inconvenience than a hardship.”

There have not been any furloughs or layoffs, and the staff is still working with old and new customers.

Syntiant is backed by investors including Intel Capital, Microsoft M12, Bosch Ventures and the Amazon Alexa Fund. It raised $25 million in Series B funding in late 2018.