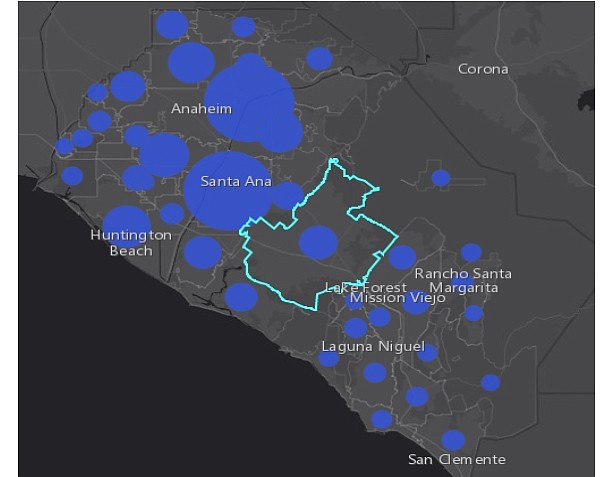 Irvine (outlined above) saw new surge in cases in past month

Irvine, a city that saw early increases in COVID-19 cases before flattening in later months, has seen a new surge in cases in recent weeks, this time much more prominent than before.

The city, which counts a population of 280,202 and is considered a business and education hub with the Irvine Business Complex and the University of California-Irvine, has 1,000 total cases, or 36 cases per 10,000 residents.

Nearly 74% of those cases have occurred in the month ending July 20.

Most cities are seeing new surges in case counts, as countywide figures increase at a much more rapid pace in the past two months than in the first three months of the virus in the county.

Newport Beach, also a city that saw initially higher cases due to increased testing access before dropping off, has had 526 new cases in the month ending July 20, which, like Irvine, represents nearly three-fourths of the city’s total cases. It currently has 719 cases, or about 82 cases per 10,000 residents.