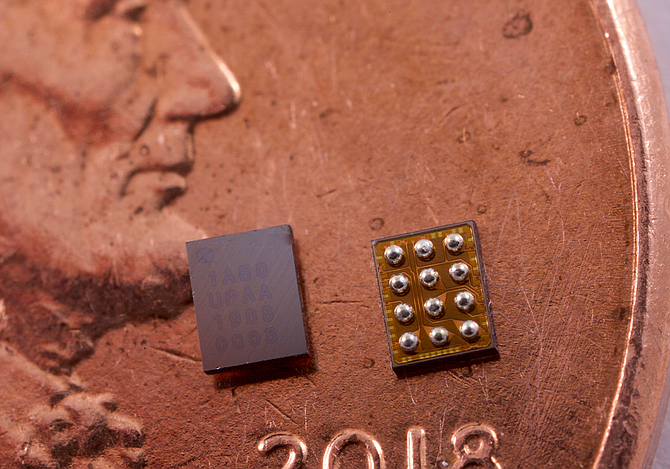 Syntiant Corp. in Irvine says sales of its next-gen chips for voice control of electronic devices are taking off, while the closely watched semiconductor firm just got a $35 million boost from financial backers including Microsoft’s venture capital fund M12.

“We think that we’re in a very good position,” Chief Executive Kurt Busch told the Business Journal on Aug. 3.

The chips, which use a tiny amount of energy when compared to current semiconductor standards, have taken on even greater importance during the pandemic with consumers increasingly insisting on touch-free devices.

Avoiding virus infections and other contagions is a key advantage of touch-free devices.

Syntiant’s low-power chips respond to voice and speech and can wake up a device or have it perform a specific function. They are used to control smartphones, earbuds, smart speakers, laptops, hearing aids, wearables, TV remote controls and dozens of other smart products.

The chips are smaller than a tiny fraction of a penny, and are designed for what are called “always-on” battery-powered devices to enable hands-free functions. They’re also expected to help facilitate artificial intelligence and machine learning in next-gen devices.

Further growth appears to be on the way for Orange County’s next big semiconductor company.

The company last week said it received $35 million in a Series C financing round. The Microsoft unit led the latest round along with Applied Ventures LLC, the venture capital arm of Applied Materials Inc.; Atlantic Bridge Capital, Alpha Edison and Miramar Digital Ventures joined as new investors in the company.

“It is a tremendous honor to know that some of the world’s leading tech investors are supporting our growth stage, as we deliver our deep learning voice solution to customers across the globe,” said Busch, who previously led Irvine networking products maker Lantronix Inc. Other execs count ties to chipmakers with deep links to OC, including Broadcom and Mindspeed.

The new financing brings to $65 million the amount that Syntiant has raised from investors, after receiving a total of $30 million in two previous rounds. Other prior investors have included Intel Capital, Robert Bosch Venture Capital, and the Amazon Alexa Fund.

Busch said that Syntiant’s shipment of more than 1 million units of its ultra-low-power NDP100 and NDP101 “neural decision processors” is a validation of the company’s strategy.

The devices are made in the Southeast Asian nation of Singapore and the company said its chips are more efficient than current digital signal processors on the market.

“We’re shipping in millions of units now. We expect to ship in tens of millions next year,” according to Busch. He expects orders “to ramp even higher throughout the remainder of 2020.”

“There may be additional funding in our future, but this will get us a very long way, especially now that we’re starting to ship in volume,” Busch said.

The latest round “will get us close to break-even or at break-even.”

He said the company sees a “good amount” of revenue this year, though he declined to say how much.

The company says the chips cost about $1 each for high-volume customers.

Some of the funding will be put toward local hiring; the company occupies about 17,000 square feet of space in the Irvine Spectrum area.

“We plan to continue to expand in Irvine,” Busch said.

The company posted eight positions for hiring in Irvine on its website as of Aug. 4, ranging from verification engineer to senior accountant. Syntiant has more than 60 employees in Irvine.

Syntiant will also be expanding customer support teams in China and at other locations around the world.

Company officials cited a recent report published by Meticulous Research that said the speech and voice recognition market is expected to reach $26.8 billion by 2025.

More than half of Americans, including a majority of young adults, feel voice control is essential in smart devices post-COVID-19, according to a survey carried out for the company and released in May.

Busch said Syntiant has a “lead position” in the market for processors for battery-powered devices.

As the world adapts to the fallout of COVID-19, lasting effects from the pandemic indicate consumers will opt for voice-user experiences and hands-free interfaces, studies indicate.