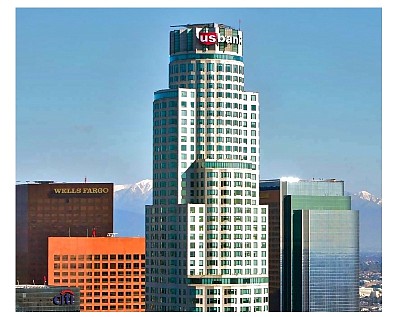 A flurry of deployment-related news emanating from the Newport Beach-based firm suggest a ramp-up in work is well underway for the privately held company.

Mobilitie said it was selected to design and deploy a custom network for downtown Los Angeles landmark U.S. Bank Tower; it’s one of several such deals the company has made nationwide in recent weeks.

The tower, once the tallest building west of the Mississippi River, rises 73 floors above West Fifth Street in the heart of L.A. International law and financial tenants require reliable high-speed mobile coverage throughout the building.

“Enhanced wireless coverage will be vital for the overall experience,” Yohannes Cramlet, director of wireless solutions at Mobilitie, said in announcing the agreement.

On Deck, Slide In

The wireless network will also complement treks to the tower’s OUE Skyspace observation deck, which attracts thousands of visitors. It extends the skyscraper squarely into social media, enabling sharing of photos and videos taken of trips down the glass slide on the outside of the building nearly a thousand feet above street-level.

Mobilitie says its neutral-host networks are open to all major wireless carriers.

The company is the largest privately held U.S. telecommunications infrastructure company. It funds, deploys and operates next-gen infrastructure; its portfolio of cellphone towers and small-cell towers runs into the thousands.

5G is the fifth generation of cellular wireless technology, currently being deployed, designed to give high-bandwidth connectivity up to 100 times faster than current 4G LTE connections.

Mobilitie’s infrastructure is often in settings with many wireless users in a relatively small area such as stadiums, malls, casinos, large office buildings—places it calls “the largest and most complex venues” for providing service.

Other locations it’s been tapped to improve wireless service in the past month include the Washington D.C. Bureau of CBS News, and Nova Southeastern University and the Diplomat Resort and Spa, both in Florida.

Mobilitie has funding for more.

The company in August said it had reached a $1 billion “exclusive arrangement with a foreign investment fund to fuel the next five years of growth around 5G infrastructure.”