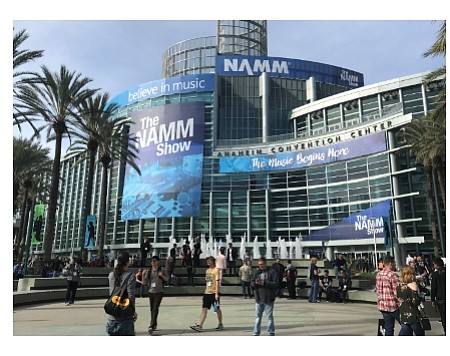 International registrants were up 8% to 19,356 registrants and came from more than 100 countries, NAMM said. Its foreign roster stretched from audio systems and equipment distributor Music Info in Kraków, Poland to OD Guitars in Israel, which makes “high-end guitars for the progressive metal modern community.”

The guitar floor in Hall E included several dozen Asia-based guitar and components makers, and custom-builder Ryan Guitars in Westminster, which the Business Journal profiled before the show.

Music maker giant Yamaha Corp. in Buena Park, which was also part of our coverage, took its long-time space — some 29,000 square feet — at Anaheim Marriott.

2018 was the first NAMM show to use the new ACC North space on the convention center campus, part of a 25% and 200,000 square foot expansion that opened in September.

NAMM has been a prime mover of several Anaheim Convention Center expansions, including this one. The group held its winter show in Anaheim since 1977, except for the years 1998 to 2000—coinciding with ACC’s last growth spurt—and six of seven ACC upgrades have come since the show started here.