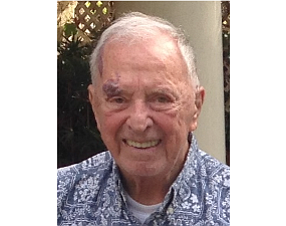 Longtime business executive and bon vivant Joseph DeFranco died Sunday at his home in Newport Beach at the age of 94.

He helmed Separation and Recovery Systems Inc. in Irvine for 28 years until his retirement in 2000, at age 77.

SRS made oil filtration products and was at the time a subsidiary of publicly held American Eco Corp. in Houston; a related company, now a privately held LLC, is based in West Deptford, N.J.

SRS was cofounded by DeFranco’s friend, the actor and OC resident John Wayne. DeFranco was a regular sight around Newport Beach—often as an informal chauffeur and tour guide for actress Maureen O’Hara.

The course of his life took DeFranco from one of seven children in a Roman Catholic family in New Jersey to the World War II Battle of Leyte Gulf, and from the Studebaker Corp. in South Bend, Ind., to Lake Como in Italy. He reputedly played golf—decades apart—with both Ben Hogan and Tiger Woods.

He met along the way, his family said, everyone from Greek shipping magnates and Russian operatives, to Saudi Arabian and Japanese royalty, to assorted presidents, diplomats and heads of state.