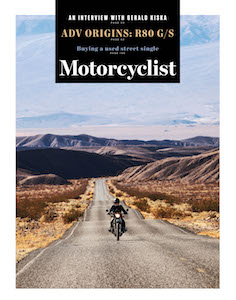 Motorcyclist magazine in Irvine will debut a new look with its March/April issue, which goes on sale Feb. 28.

The redesign includes thicker paper, a larger page size and an increased page count, from about 75 pages to about 108. It will publish six times a year compared with a previous 10 issues annually.

Both co-editors are in their 30s and have been riding motorcycles for about 25 years. They said this enables them to know what millennial generation readers want while also keeping the magazine true to the heritage of riding.

The magazine has published continuously since 1912 and maintains a website and a YouTube channel; the latter’s primary program is “On Two Wheels,” which has almost 150,000 subscribers.

The first redesigned edition includes articles on adventure bikes, a designer at an Austrian motorcycle manufacturer, and the 1981 BMW R80 G/S, known as the catalyst of the adventure bike category.