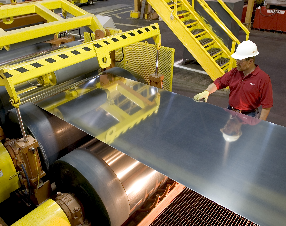 Shares of Kaiser Aluminum Corp. fell 8.8% to about $68.5 and a market cap of about $1.31 billion in after-hours trading Monday as the Foothill Ranch maker of semi-fabricated aluminum products posted $15.9 million in earnings for the third quarter, good for 85 cent a share.

“Third quarter 2014 reflected two unanticipated challenges at our Spokane (Trentwood), Washington facility that caused our results to fall short of our expectation for shipments and adjusted EBITDA,” Jack Hockema, the company’s president and chief executive, said in a statement. “In an effort to further enhance quality attributes and customer performance of our KaiserSelect plate products, we made process refinements that temporarily resulted in higher internal scrap, remakes, and lost opportunity for additional spot business during the quarter. In addition, we experienced unplanned downtime in our aerospace sheet processing operations that, although not as significant, further impacted shipments during the quarter. These two issues had a direct impact on adjusted EBITDA of approximately $5 million in the third quarter.”

Hockema said the company anticipates that fourth quarter revenue will be similar to the third quarter, and “that full year 2014 adjusted EBITDA will fall slightly below 2012 and 2013 levels.”

The analysts expected 3.8% growth for the year.