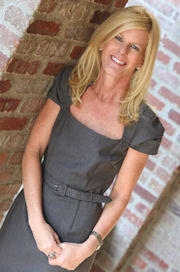 Small really is the new sexy.

They’re customers of the Itty Bitty Bra that Jane Alden Hodgdon designs at her home in Irvine and sells through the ittybittybra.com website.

The bras and other items also are available on about 20 other websites. About 70 U.S. and global stores carry them, including Sydney Michelle on Balboa Island and Fred Segal in Santa Monica.

Hodgdon started the company in 2007 and launched the Itty Bitty Bra in 2008.

It’s a shift from her days in marketing and event planning for Anaheim display electronics maker Extron Electronics, a career she walked away from after having her second child.

It was her own search for a well-fitted affordable bra that led her to design for a niche of the market. Bras run from 32 A, AA and B up to 38 A, AA and B.

They come in five different styles—the Signa-ture Bra, the Couture Bra, the Removable Pad Bra, the Strapless Bra and the Bralette—with various patterns and colors.

Designing the Itty Bitty Bra was trial and error, according to Hodgdon. Bras can have more than 20 pieces, she said, from straps, cups and underwire to padding and clasps that are placed on the strap.

“I just wanted minimal coverage, some lift, a great fit, and of course, I didn’t want the bras to pucker and gap,” she said. “It took me a year and a half to come up with my first legitimate sample. Had I known what I know now, I might not have done it.”

Patents are pending on her bras.

The molds, or bra cups, come from Canada. The final product is made in China.

It takes about six months from sketch to actual product.

Only the company’s camisoles—relatively simple items to produce—are made in Los Angeles.

Hodgdon funded the company herself and is the only full-time employee. She hires part-time college students and counts on family members to help.

She declined to give a sales figure. Revenue is up 90% this year thanks in part of a lot of media buzz, according to Hodgdon.

“I just got a mention in People’s Stylewatch,” she said. “Whenever that happens, I always see a big surge on my site, and retailers start calling and asking if they can have it in their stores.”

The company also has gotten coverage in trade and consumer publications, including Women’s Wear Daily, InStyle and the New York Times.

That helped Hodgdon start sales in South America and Puerto Rico this year and lay the groundwork for expanding in Europe.

“A retailer in Majorca, Spain, called me up and asked for the product,” Hodgdon said. “She told me she saw it at a New York show and had to carry it.”

“When I started this business, I didn’t want to sell on the Internet,” Hodgdon said. “I wanted to be a wholesale business. But then I got mentioned in a few publications and I had no choice but to start my own online shop.”

Competitors include The Little Bra Company in Toluca Lake and Lula Lu in San Mateo.

One difference is that Itty Bitty Bra isn’t just for petite women—typically defined as 5 feet 2 inches or shorter, Hodgdon said.

Her niche is any small-chested person regardless of weight, height or build.

Products on tap include the Flatter Me Bra, set for sizes 40 to 48 AA, As and Bs.

It’s an underserved market, according to Hodgdon.

Media buzz played a role in the new line.

“We happened to be on MSN.com and I got like 400 to 500 emails from people asking me to do this size for this market,” Hodgdon said. “This niche has not been fulfilled and I’m the one starting it.”

It took a year working with bra fitters across the country to create the Flatter Me Bra, Hodgdon said.

The bra now is in production.

QVC Inc., the home shopping channel, has shown interest. A representative of the company saw the Flatter Me Bra sample at a recent show and told Hodgdon to contact him when the line is ready, she said.

Hodgdon also decided to create a swimwear line after requests from volleyball players.

“They want a little padding in it and they want it to stay put and support them,” she said.

Designs are in the works.

She’s also planning a convertible strap bra, lightly padded with no underwire. It will debut during fashion shows in August for the following spring. And there will be a strapless version with sequins for the holidays.

Hodgdon said she’d like to see her lingerie in major department stores such as Nordstrom or Macy’s some day.

“So far they think there’s no need for my bras in their stores,” she said. “It frustrates me because there are so many people wearing my bras, and they can’t get them at a big store.”