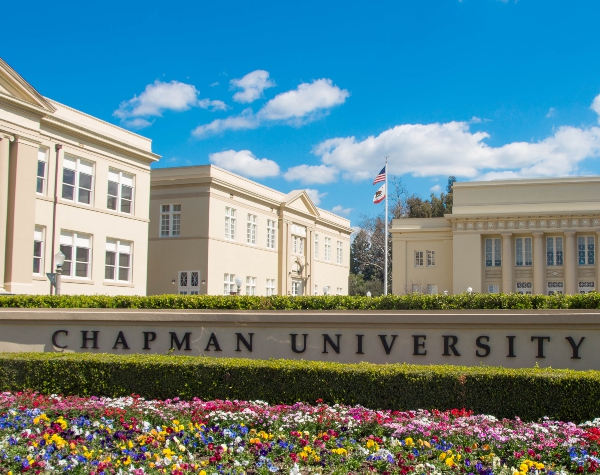 After a summer surge in COVID-19 cases that placed Orange County back on the state’s county monitoring list, Chapman University now expects to start its academic year remotely, despite investing millions into an aggressive plan to reopen the campus with in-class teaching for the upcoming semester.

Still, the Orange-based private institution is prepared—with personal protective equipment, infrared technology, a testing contract and more—to bring its students back to campus as soon as the state permits in-person instruction.

“It’s very likely we will start with virtual operations, but it is my hope and commitment that as soon as we can get back into the classroom, we will,” Chapman President Daniele Struppa told the Business Journal.

“Orange County needs to fall off the state’s watchlist, which could be mid-September, mid-October, or later,” he said.

“I don’t regret the investments we’ve made. We have walkways labeled, temperature checks, an app that checks symptoms, and we’ve made a huge investment in technology for remote learning. In the long run, I think the university will benefit from these investments.”

Chapman traditionally has emphasized learning inside classrooms with fewer than 25 students versus virtual learning. In March, the university shut down all its classrooms, forcing students and teachers to go online.

The university reimbursed students for unused housing, dining, parking and other service fees in the spring semester.

At the time, Chapman estimated it lost about $13.5 million in refunds and unanticipated expenses, with the potential to lose up to $110 million if it couldn’t reopen in the fall.

Since then, the board has approved a nearly 13% budget cut from $431 million to $374 million. Now Chapman will likely seek approval to further reduce its budget for the 2020-21 year, Struppa said.

The budget cuts are mostly in the areas of faculty and hiring freezes, travel and operating expenses, and delayed property buybacks and capital projects.

Chapman expects to begin the fall semester, which begins at the end of August, with about 7,880 students, down 20% from a year ago.

Chapman is considerably smaller than the state-run University of California-Irvine and California State University-Fullerton, which each had about 40,000 enrollees in the last academic calendar year. Its smaller size gave the school confidence a few months ago that it could open classes earlier than its larger peers.

Chapman’s most significant financial loss will come from reduced enrollment, which Struppa estimates will be in the negative 20% range from last year to this year, resulting in fewer tuition payments to the university.

“Chapman is a tuition-driven university. Tuition is based on the cost of operations, and that has gone up, so we really can’t reduce tuition,” Struppa added.

Tuition made up 82% of Chapman’s total revenue in the 2019-20 year; tuition runs about $28,415 per semester, though more than 80% of students receive scholarships or financial aid.

It also expects to take a hit in revenue due to reduced student housing. Normally, it would house 3,650 students, a number which may fall to 1,600.

In the most extreme case, that number could fall to 300 beds for international students and others that require on-campus housing, Struppa said.

College in the Fall

In June, Chapman announced its plan to resume in-class instructions this fall as well as some classes staying online. The university highlighted its careful financial planning and relatively small student population as advantages.

As part of the privately held institution’s CU Safely Back plan, Chapman spent $8.3 million in personal protective gear, which includes a $1.65 million contract with Laboratory Corp of America Holdings to provide COVID-19 tests and $260,000 so that each student receives three washable, university-themed face masks.

Chapman’s approach shifted when Gov. Gavin Newsom on July 20 announced requirements that the county must be off the state’s watch list for 14 consecutive days before reopening in-person instruction for K-12 education. The governor has yet to provide guidance on higher education, but Chapman said it expects similar instructions.

Chapman now plans to begin its upcoming semester remotely, with a transition period to in-person instruction as soon as possible.

It has invested $2.6 million in remote technologies, software programs and faculty training; about $1.3 million was spent specifically on classroom upgrades that allow faculty to broadcast their lectures via Zoom, while sharing content from their computers or a whiteboard in a classroom.

Chapman will be flexible about bringing its students back to campus.

“We’re going to give undergraduate students the remote option for this semester, because some students might not be comfortable coming in right away,” Struppa said.

Struppa added the university expects the state to make exceptions for graduate level courses at its Irvine Rinker Health Science campus, which require in-person instruction for lab courses and various exams and contribute to the essential healthcare workforce.

Struppa said the school’s recent investments will not go to waste.

Struppa, who will teach an undergraduate class on differential equations in the fall, said he enjoys the virtual environment because he can prepare lectures ahead of time, and spend valuable class time answering students’ questions instead.

In addition, Struppa said he envisions other situations where the technology enhancements will come in handy.

“Whether it’s another pandemic, or for example, a few years ago we had to close our campus due to smoke from wildfires. That would have been a case where remote technologies come in.”

Chapman “entered the pandemic from a position of financial strength” with an endowment of more than $400 million, according to Struppa.

The university immediately ramped fundraising efforts and launched an emergency fund to help students in need of financial assistance.

Additional steps to reduce costs included pausing travel and cutting senior staff pay about 15%, while Struppa took a 20% pay cut for the rest of the year beginning June 1.

Chapman has not had layoffs thus far, but Struppa indicated faculty and employees could be impacted in the fall.

Though Struppa said the university will endure and “weather the storm,” the new expectation to begin the fall semester online with no end date in sight means difficult decisions lie ahead.

“The one thing that worries me during the day is that I think it’s the fundamental responsibility of a CEO to take care of their employees and preserve their ability to lead their lives as much as possible. That is very important to me, and we’ve worked hard to preserve our employees and their salaries. So, what worries me is that restrictions might force us to take different actions.”