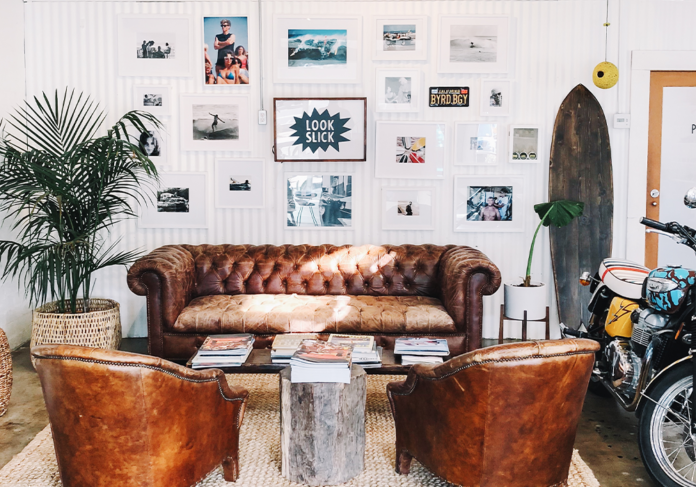 Pro-surfer and entrepreneur Chase Wilson got his first fade haircut in high school and then became obsessed with haircare.

“That’s when I started geeking out on products,” Wilson said.

That didn’t stop when he turned pro and began riding for Huntington Beach-based Quiksilver Inc., quickly learning water-based products had a tendency to run in his eyes; wax-based products would sometimes take weeks to wash out.

“That’s when I set out to develop my own formulation. I was melting down beeswax in my mom’s crock pots,” he said.

“I ruined a couple of those in the kitchen.”

She can’t be too mad at this point. Wilson’s men’s haircare and grooming line Byrd Hairdo Products, named after Wilson’s nickname “Big Bird,” has bootstrapped its way to sales of nearly $5 million, according to Business Journal estimates.

While still in its infancy in terms of sales, a big boost in sales appears in store, despite the pandemic-induced downturn.

The line expanded distribution to 2,000 CVS stores this spring, a tenfold expansion of its retail presence.

The company recently reopened its Newport Beach barbershop The Byrd’s Nest after the lift of California’s business restrictions.

A second barbershop recently opened in West Hollywood, and about a month ago the company nabbed greater placement on Amazon with the move to the site’s luxury beauty section.

The sector is a good space to be playing in, as greater awareness about self-care and men’s grooming takes off. The global market is estimated to hit $66.8 billion in sales, according to research firm Statista Inc. That’s expected to grow to $81.2 billion by 2024.

Stay-at-home orders since March certainly helped product makers in the space as some people were emboldened—or just bored enough—to take on DIY haircuts and beard trims.

When many of Byrd’s retail partners—it now counts about 2,200 chain stores and boutiques after the CVS deal—closed temporarily due to COVID, Wilson and team focused on their own e-commerce. He said sales are up 100% year-over-year.

Next year, Wilson said, is when there will be more product launches, but for at least the rest of this year the focus remains on where business is moving the fastest: online and then further expansion at CVS.

As for the much longer term, delving into the women’s market has been a consideration. The company’s product line—while largely billed for men—carries items such as a texturizing surf spray ($16) or shampoo and conditioner ($20 each) that women use.

Growing out the brick-and-mortar side is also the plan, planting brand flags across the country, whether that be via company-owned or a licensing model of the barbershops.

“The Byrd’s Nest is an extension of who we are and what we do,” Wilson said of the barbershops.

The grassroots story of how Byrd came to be is also part of the brand. The company’s been entirely self-funded with Wilson’s capital and that of friends and family.

Entrepreneurship runs in the family. His father and brother are residential developers with a recently-opened office on Sunset Boulevard in a space where restaurant Spago previously sat. His mother also operates her own business; and Wilson’s great grandfather owned a barbershop at the famed Metropole Hotel in Fargo, N.D., traveling around the country selling his hair tonic. Wilson said his grandmother didn’t uncover that story until after Byrd had launched.

Wilson started Byrd largely out of necessity wanting something better for his hair that also held up while he was out catching waves. That bore out in Byrd’s classic pomade (starting around $10), launching the brand in 2012.

“I didn’t expect, by any means, for it to get to this point because I was just following my gut,” Wilson said.

That’s partially why he started out in the kitchen attempting his own formulations before seeking out a private label haircare manufacturer. After a dozen revisions, he decided on a formula. He bought his own tins off the shelf and affixed labels to them, selling the pomade out of the back of his car.

“My first ever order, I walked into a boutique and they’re like, ‘OK, we’ll take 12.’ So I had to go back in the parking lot and label all of them. That took about 30 minutes. He was like, ‘Where the hell did you go?’”

Wilson, not wanting the merchant to think he was small time, told him he had to take a call.

From that one store, he kept building and hasn’t stopped since.

“From the sales side, you do get a lot of ‘Noes’ and you can’t let that discourage you,” he said. “For every 10 ‘Noes,’ you get a ‘Yes,’ so you just have to keep positive. A lot of it comes down to work ethic and believing in what you do and just remaining authentic to that.”