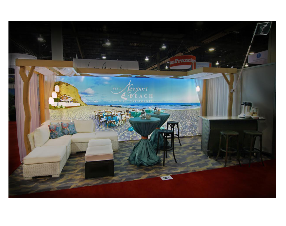 The destination marketing organization for Newport Beach is using images gathered by a drone to promote the city at U.S. trade shows and, separately, in London.

Newport Beach & Company said it shot aerial footage of Crystal Cove beachfront and used the images to design and decorate a new trade show booth it uses to promote the city for conferences.

Images will also be used on a “clear-sided” truck—the interior is visible—driving through London in the first week of February to market a contest to consumers that offers a 10-day trip to Newport Beach in conjunction with the Newport Beach Film Festival in April.

The effort is more generally about getting Londoners to travel to Newport Beach, a spokesperson for the organization said, and travel and tour operators who book trips get a shot at a second free trip as well.

The spokesperson said said the booth is accurate down to the sand—images of which cover the carpet of the booth—and there is real sand on the floor of the truck, covered with a layer of plexiglass.

In the past the group has placed images of the city on London taxis, and in the front display window of the Harrod’s department store.

It’s the second local group to run an entertainment industry-based trip contest overseas. The Irvine-based Orange County Visitors Association conducted one last fall in the Middle East, centered around the Arabic version of the TV show, “The Voice.”