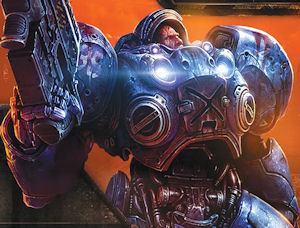 Irvine-based online game developer Blizzard Entertainment Inc. is looking to revive a franchise that’s been in the shadows for more than a decade.

On Tuesday, Blizzard is set to release “StarCraft II,” a sequel to 1998’s “StarCraft” that was five years in the making.

“The team has been working very hard to get this game into the hands of our fans,” said Frank Pearce, Blizzard’s executive vice president of product development and the executive producer on “StarCraft II.” “The game is awesome, and we are all really excited. We are also very relieved to be done with it.”

“StarCraft II” comes at a critical time for Santa Monica’s Activision Blizzard Inc., the parent of Blizzard Entertainment that itself is a unit of France’s Vivendi SA.

Publicly traded Activision Blizzard earlier this year gave an outlook for the balance of the year that came in lower than Wall Street’s estimates.

The company is expecting profits, excluding one-time charges, of $889 million on sales of $4.4 billion. That’s roughly flat from 2009 sales of $4.3 billion.

Activision is in a bit of a lull between releases of new games from a few of its blockbuster video game titles, “Guitar Hero, “Call of Duty” and “Tony Hawk.”

“We have Activision Blizzard’s revenue declining by 7% this year, but ‘StarCraft II’ is certainly an important part of (Blizzard’s) release schedule for this year,” said Colin Sebastian, an analyst at Lazard Capital Markets LLC in San Francisco.

Blizzard makes up about $1.3 billion of Activision Blizzard’s yearly sales.

Blizzard’s cash cow is “World of Warcraft,” a fantasy-themed, online role-playing game in which millions of players face off over the Internet.

Subscription growth for “World of Warcraft,” which counts some 11.5 million players, has stalled some.

“Subscription growth has flattened out a bit, but it’s a strong community of users, and remained remarkably stable even during the recent macro downturn,” analyst Sebastian said. “We think the next big challenge for Blizzard is whether they can replicate the success of ‘World of Warcraft’ as a subscription business with other franchises, such as ‘StarCraft.’”

“StarCraft II” is what’s known in the industry as a real-time strategy game in which three races—the “protoss,” “terrans” and “zerg”—face off in a science-fiction world.

The game is split into three installments. The first installment, to be released this week, is dubbed “Wings of Liberty.” Two expansion packs are due out in the next few years with the titles “Heart of the Swarm” and “Legacy of the Void.”

“StarCraft II: Wings of Liberty” is set to go on sale on Tuesday for about $60 a pop. A special collector’s edition goes for $100.

Blizzard also has an expansion pack due out this year for “World of Warcraft,” called “Cataclysm.” No release date has been announced.

“We think ‘StarCraft II’ will be much bigger than ‘Cataclysm’ in terms of unit sales,” Sebastian said. “But the more important role that ‘Cataclysm’ may play is reducing churn of ‘World of Warcraft’ subscribers, and quite possibly reinvigorating the core user base.”

“StarCraft II” players could surpass 10 million worldwide, including in Asian markets such as South Korea and China, according to Sebastian.

Some industry watchers say the “StarCraft II” trilogy eventually could deliver $500 million to $1 billion in profits over the life of the game.

Blizzard’s Pearce said the company has its own internal sales projections for “Star-Craft II” but doesn’t disclose them.

Blizzard is gearing up for the “StarCraft II” launch with lots of marketing.

It aired the first in a series of television spots during game four of the NBA finals last month.

The company also has done a lot of ads on game websites.

“This is a global release—it will be shipping in 11 languages across five continents,” said Bob Colayco, head of public relations for “StarCraft.” “It’s ambitious.”

Blizzard also is doing some promotions closer to home.

It’s hosting a midnight launch on Monday at Fry’s Electronics in Fountain Valley. Developers will be on hand to sign copies of the game for enthusiastic fans, who also will be treated to live music and gaming competitions.

Launching a game at Fry’s has become a bit of a tradition for Blizzard.

Thousands of fans lined up when “World of Warcraft” first went on sale in 2004.

“Hopefully a lot of fans will come out to see us,” Blizzard’s Pearce said.