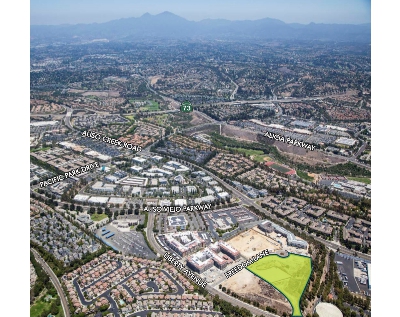 The Dallas-based company, whose Lake Forest-based affiliate ARB Inc. ranks No. 5 in this week’s Business Journal list of construction firms in Orange County (see list, page 35), is expected to build a two-building Class A office project on the land, although the company has not confirmed the plans.

The site is just off Liberty Road not far from Aliso Viejo Town Center.

The buildings—part of a 25.6-acre commercial development that includes newly built and under construction healthcare and senior living facilities—could run about 90,000 square feet.

It would be the largest office development built in the city for a specific owner since neuroendovascular device maker MicroVention Inc. opened its 205,000-square-foot Aliso Viejo headquarters about two years ago.

A time frame for the construction starting work has not been disclosed, and Primoris representatives last week indicated that plans for the site had yet to be finalized.

Primoris and its affiliates currently lease space in Lake Forest; they’re estimated to employ about 200 people in the county.

The company paid nearly $10.2 million for the Aliso Viejo land, of which 5 acres is developable, property records indicate.

The deal, if it moves as expected, would mark a notable commitment to the area from Primoris, which previously was headquartered in Lake Forest.

It moved headquarters from OC to Texas in 2010, following acquisitions in Texas and Louisiana that brought more business in the central part of the country and Florida.

It was founded under the ARB name and initially focused on infrastructure, underground pipeline, and directional drilling work when it was based in OC.

It changed its name and went public in 2008 via a reverse merger.

Primoris earned $2.9 billion last year. In its last year based in Lake Forest, revenue was closer to $600 million.

The company still has high-level ties to OC; board members include Tom Tucker, one of the area’s more connected execs—he’s the founder of Pennhill Land Co. and Republican political action committee New Majority California.

End of the Line

In terms of developable commercial sites, the just-sold spot is “probably the last one left in all of Aliso Viejo,” said Carter Ewing, managing partner of Newport Beach-based CT Realty.

CT Realty—one of the country’s most active developers of large industrial parks— has been overseeing the 25.6-acre Aliso Viejo site since 2016, when it paid the U.S. Postal Service a reported $33.6 million for the vacant land.

It has since split up the site into multiple parcels and sold them off to a handful of separate users; the land sold to Primoris included the last available parcels at the site.

New offices “will be a nice complement to the medical offices, senior apartments and assisted-living facilities under construction or recently completed,” Ewing said.

Primoris was represented by Newmark Knight Frank’s Scott Read, according to brokerage data.

Once the full buildout of the campus is complete, “our mixed-use development will have created about 400 jobs and generated $300 million in assessed value on land that hadn’t ever paid any property taxes,” Ewing said.

In the end, “the project has been good for CT, good for City Hall, good for the local community, and good for the five corporate owners that will operate their unique businesses within the park,” Ewing said.

The new Primoris offices, if built, will be the second notable location in the city for a prominent construction and engineering firm based in Texas.

Flour Corp. was previously based in Aliso Viejo, but like Primoris, it relocated to the Dallas area, in 2006. It still has operations in the city.