Chapman Law Gets Hands On Entertainment Law With Clinic 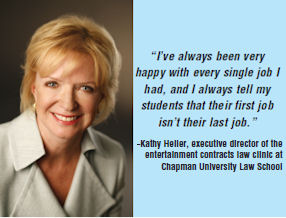 Entertainment law can be as dynamic as show business itself, and attorneys with clients in the entertainment industry need to stay abreast of the latest trends and regulations that are shaping the industry to best serve their clients.

“The creation and means of accessing media has changed considerably since 2007,” said Kathy Heller, founder and executive director of the clinic. “When the students entering law school this fall graduate in three years it will surely have changed in ways we cannot foresee today. This means we are preparing students who will work on challenging new legal issues and many will likely work for clients that do not yet exist.”

Chapman’s law school is among several in the region that gives students a wide range of courses in entertainment law. Chapman’s contracts law clinic stands out because it provides students with hands-on experience.

“To my knowledge, there’s no other law school that has a clinic like this,” said Ian Gibson, a 2010 Chapman Law School graduate, who is now an associate at Newport Beach-based One LLP, a boutique firm that specializes in intellectual property and entertainment law firm. “It’s something truly unique.”

Chapman’s entertainment law offerings—particularly its clinic—drew Gibson to the school.

The entertainment law clinic gives its students hands-on experience by hooking them up with ultra low-budget student films—productions with budgets of $200,000 or less, according to Heller.

Students in the program provide free legal services to budding filmmakers, helping them form a corporation, draft rights agreements, file for copyrights and draw up contracts associated with production. The students’ work is overseen by entertainment attorneys with years of experience representing individuals and companies in matters involving film finance, production and distribution.

The program has been successful “in part because we communicate with some of the other parts of the school, including the film school and business school,” Heller said.

Some of the other entertainment law courses offered at Chapman include: copyright law, film and television law, legal and business affairs in Hollywood, new media and the entertainment industry, negotiating and drafting media industry transactions, Internet law, music law and the music industry, and law, lawyers, and the legal system in film.

“We’re always looking at opportunities to give students as much background as possible in an academic environment,” Heller said.

Chapman law students were responsible for all of the production legal work on Targeting, a recently released independent film that tells the story of a female U.S. soldier who returns from Afghanistan and begins to run surveillance on an Afghani living in her hometown.

Chapman’s entertainment law clinic has provided free production legal services to filmmakers who have won numerous awards and honors over the past three years, including: the Newport Beach Film Festival Audience Award for Best U.S. Film; the Netflix Find Your Voice Film Competition; the Tribeca Film Festival Official Selection; and the AFI Film Festival Official Breakthrough Selection, among others.

“The experience is real as it gets,” Gibson said. “We worked with several films over the course of the semester. From start to finish, we had direct contact with the filmmakers under Heller’s supervision.”

Michael Karlin, who is now an associate with Tustin-based boutique Karlin Law Firm, also graduated from Chapman Law in 2010. He spent two semesters in the entertainment law clinic, and provided legal assistance for several independent films, including the coming-of-age drama Almost Kings, winner of the Netflix Find Your Voice film competition.

“I thought it was a great school, and their entertainment program really prepared me for what I’m doing in my practice,” he said. “Having practical experience, as opposed to just sitting in a classroom, made a huge difference.”

Karlin’s participation in the clinic gave him work experience that other recent graduates may not get while still in law school, he said.

“It’s very intensive, but it has a big payoff,” said Heller, who added that one of the key reasons for the program’s focus on hands-on experience is the fact that she began teaching late in her career.

“We’re dedicated teachers, but we bring some practical experience to the table,” she said.

Heller returned to the U.S. to serve as vice president and special counsel for congressional relations at the Motion Picture Association of America Inc., where she coordinated the formulation of policy and lobbying for the major U.S. motion picture studios.

Heller has been in private practice since 1993, representing corporations that provide products and services related to the entertainment industry, and corporations and individuals engaged in domestic and international media production and distribution.

She became the director of the Media and Public Interest Institute at Chapman University in January 2006, and taught her first classes in entertainment law at Chapman in the fall of 2007.

“Entertainment law has provided me wonderful opportunities,” she said. “I’ve always been very happy with every single job I had, and I always tell my students that their first job isn’t their last job.”

Iyer is a freelance contributor to the Orange County Business Journal.