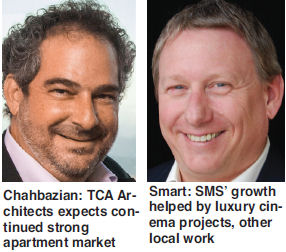 Orange County’s architecture firms rode the momentum of strengthening business opportunities through the past year as they combined for a 13% increase in local billings, the highest growth rate in at least five years.

The 35 largest firms with headquarters or significant operations in OC together generated $419 million in billings through their local offices for the 12 months through June. That compared with $370.8 million a year earlier, according to this week’s Business Journal list, which is based on billings.

A continued recovery in the U.S. economy and increasing demand from businesses and developers for real estate, as well as returns of paused projects (see related story, page 34), have blended to push along the growth of architecture firms here.

The latest revenue increase followed two periods of modest growth—8% and 4%—after a two-year streak of revenue drops during the recession.

Overall employment at the firms grew by 2% to 2,226 workers, including roughly 400 licensed architects.

Seven firms said they saw declines in local billings, while 22 reported increases, with many notching double-digit gains. One firm saw its revenue stay the same, and the Business Journal estimated figures for five firms.

• Irvine-based LPA Inc. kept its No. 1 spot, with 4% growth in OC billings to $46.3 million during the year through June. The firm has 42 licensed architects here after hiring one in the past year. Its total number of local employees, including support staff, stood at 165 as of August after it hired 13.

LPA provides design and planning services to the education, civic and corporate sectors, among others. Its projects include the Irvine headquarters of Blizzard Entertainment Inc. and Irvine Valley College’s technology center.

• Irvine-based MVE Group moved up one spot to No. 2, with a 56% increase in local billings to $44.4 million. The firm increased its headcount by 11% to 104 overall in OC, including 22 licensed architects (see related story, page 1).

• Architects Orange was ranked the third-largest firm in OC. The Orange-based firm had $35 million in local billings during the year, a 49% increase from a year ago.

It hired 17 workers during the past year, boosting employee count to 173, including 36 licensed architects as of August.

• TCA Architects Inc. in Irvine remained at No. 10, while its local billings grew nearly 28% to $15.8 million. The company hired nine licensed architects over the past year, for a total of 34 in its OC office. The firm also has offices in Los Angeles and Oakland.

TCA President Aram Chahbazian said he expects the apartment market to be strong throughout 2014 while the for-sale market sees modest growth checked by interest-rate pressures.

“There continues to be significant demand in the strong coastal markets, which is where much of our work is based,” he added.

• Jeffrey Rome & Associates in Newport Beach which debuted at No. 12 as it doubled its OC billings to $10 million. Founder Jeffrey Rome is the sole licensed architect at the company, which has 55 employees.

“I have a lot of people working toward their licenses,” Rome said. “Within three years, we’ll probably haveabout 15 who are licensed.”

Much of Rome & Associates’ projects are in the telecommunications industry, though the firm expects that to change soon, Rome said.

“Our commercial work slowed down immensely in 2008 and 2009, and our telecom work just continued to grow,” he said. “Commercial work has been coming back slowly, so in the next billing cycle, we’ll go from 95% telecom to about 75% telecom and 25% retail commercial.”

“It’s just really hiring out of need because of the project workload we have,” said Greg Simonoff, who serves as a principal of the firm. “We’ve been fortunate in getting a lot of repeat business.”

Principal Joseph Smart said the growth was thanks in part to the general recovery in the real estate and construction markets, “but also, we’ve had the opportunity to work on a number of fairly large projects here in Southern California.”

The firm has worked with Cinépolis Luxury Cinemas, a Mexico-based chain of luxury movie theaters. Cinepolis has five locations in California, including in Laguna Niguel and Rancho Santa Margarita.

Five-year-old SMS also has expanded its reach into the hospitality and restaurant industries over the years, recently working on the Carthay Circle Restaurant at Disney California Adventure Park.