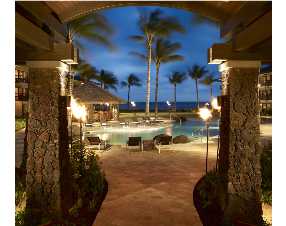 It’s Pacific Hospitality’s first acquisition in Hawaii and second outside of California. In August it bought AC Hotel New Orleans for about $60 million, which Chief Investment Officer Kory Kramer said “has exceeded our pro forma expectations.”

PHG owns and operates 10 hotels, including four in Orange County. Six of the 10, including Ko’a Kea, are high-end resorts it calls the Meritage Collection. Ko’a Kea’s rooms run about $375 to $525 a night.

Kramer said PHG buys luxury properties in growth markets that are difficult for competitors to enter.

The Ko’a Kea is “high-barrier like Coastal California—once you’re in and you’re an owner it mitigates some risk because you don’t have to worry about new product coming online.”

Kramer said occupancy at the hotel has been at about 63% and “20 points below its peers.” He said “including it within our (Meritage) hotel family means we can leverage our database of clients to drive business.”

The Kauai resort is on the site of the former Poipu Beach Hotel, which was heavily damaged by Hurricane Iniki in 1992, then reconfigured as a 121-room luxury resort.

It reopened in April 2009 after a renovation of at least $25 million, according to Honolulu-based contractor, Form Partners LLC.

The seller is an affiliate of Kalaheo, Hawaii-based CTF Hawaii Hotel Partnership, part of the hospitality holdings of the Hong Kong-based Cheng family and New World Group, which owns Dallas-based Rosewood Hotels & Resorts LLC and, among other assets, the Carlyle Hotel in New York City.