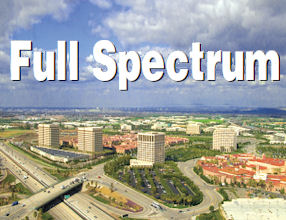 The Irvine Company has proposed a major dose of office development in anticipation of nearly 20,000 new jobs that are expected to come to the fast-growing area of the Irvine Spectrum over the next five years.

Close to 5 million square feet of new office space, including a pair of towers, has been eyed for the area in and around the Spectrum, according to Irvine Co. marketing documents.

The Newport Beach-based real estate owner and investor is considering office developments on up to nine different land sites, with a mixture of low-rise office campuses and high-rise buildings, company documents show.

The two proposed office towers could each run as large as 446,000 square feet—nearly 80,000 square feet larger than any other tower in the immediate area—while the largest low-rise campus could top out at a little more than 1.2 million square feet, documents show.

Some of the projects could be built “over the next several years,” according to the company.

The office plans, along with proposals for new home and apartment development in the area, were detailed in marketing materials that Irvine Co.’s retail division prepared in April for prospective shopping center tenants in the area.

A specific time frame for any of the individual office projects moving ahead hasn’t been disclosed by Irvine Co., the dominant real estate firm in Orange County and the state’s largest office landlord.

Company executives said last week that a time frame for the bulk of any new office development likely is a few years further out than its marketing materials suggest—unless a specific tenant signs up for a build-to-suit project on any of the sites.

“We are a planning company, and this is part of our near- and long-term planning, which will be influenced by market demand,” said Irvine Co. spokesperson Mike Lyster. “Our planning builds on the Irvine Spectrum as a place to live, shop, work and play. Future projects will enhance Irvine Spectrum’s options for residents, businesses and shoppers.”

The proposed developments, if they all move ahead, would have a huge impact on the size of the Spectrum’s office market, which currently stands at nearly 10 million square feet.

Irvine Co. owns about 75% of the higher-end, for-lease offices in the Spectrum, according to data from the local office of Jones Lang LaSalle.

The development plans for the Spectrum area also are the latest sign of growth for Irvine.

The city now has nearly 230,000 residents, after seeing its population grow by 4.2% during that time, the new census data show. Irvine is now Orange County’s third-largest city, having passed Huntington Beach for that title in 2008.

The city also continues to be one of OC’s leading sources of new jobs, and the proposed office development in the Spectrum appears designed to help it keep pace with the next round of employment growth in the area.

The Spectrum area currently counts about 3,500 companies and 80,000 employees, according to data from Irvine Co.’s office division.

As many as 20,000 additional office workers could be added to the Spectrum area over the next five or so years, according to projections cited by the company’s retail division.

The company’s plans do not disclose whether individual office projects would be built on a speculative basis or for a specific tenant.

Office projects being considered by the company include a pair of office parks near the Santa Ana (5) Freeway and Sand Canyon Avenue that would each top 1 million square feet when built out.

A similarly sized project has also been proposed along the San Diego (405) Freeway between the Quail Hill and Laguna Altura housing communities.

The largest of those three projects would appear large enough to support a company such as Irvine-based Broadcom Corp., which is said to be eyeing locations for a new office campus.

The chipmaker has been in negotiations with the city of Tustin for nearly a year over a potential campus at the Tustin Legacy development to replace its current site at University Research Park, where it leases close to 900,000 square feet from Irvine Co.

Broadcom also is said to have eyed other locations in the area for a potential campus, including the Great Park in Irvine.

Other Irvine-based companies said to have considered sizable build-to-suit projects over the past couple of years include Blizzard Entertainment Inc. and Vizio Inc.

Real estate sources not affiliated with Irvine Co. said they wouldn’t be surprised if the landlord moves ahead on at least one new speculative Spectrum office tower in the not-too-distant future, thanks to strong tenant interest in the area of late for the landlord’s other high-rises.

The four office towers in the Spectrum that are owned by Irvine Co., totaling 1.3 million square feet, are about 97% leased, according to brokerage data.

The overall office market in the Spectrum area has a vacancy rate of about 10% for higher-end buildings compared with an average of about 15% for class A buildings countywide.

The Spectrum area also is expected to remain a source of new homes and apartments for years to come.

Irvine Co. plans a 1,950-home project to go up near the company’s just-opened Los Olivos apartment complex on the current site of the Verizon Wireless Amphitheater. That residential project wouldn’t move ahead until the amphitheater’s lease for the site ends in 2017.

Also on the books for the area is a 150-home, high-end project south of Laguna Altura called Hidden Canyon. That project also is believed to be several years away from moving ahead.

Another two Spectrum-area apartment complexes, totaling about 1,340 units, are in the cards, near the company’s existing Park and Village complexes. Those projects, tentatively called Centerpointe and Westview, are likely to be the next residential projects in the immediate area to move ahead for Irvine Co.