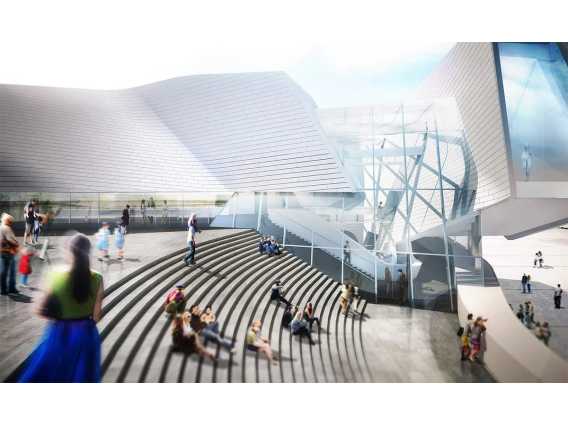 The Orange County Museum of Art (OCMA) said its new $93 million building will open to the public on Oct. 8, 2022, with a celebratory nod to the California Biennial 2022 exhibition.

The 53,000-square-foot facility, anchored by the open public plaza at Segerstrom Center for the Arts in Costa Mesa, was designed by Morphosis, the global architecture and design firm founded by Los Angeles-based Pritzker Prize-winner Thom Mayne. The California Biennial 2022 will be the inaugural exhibition in OCMA’s new home, which includes 25,000 square feet of flexible exhibition space—approximately 50 % more than its former Newport Beach location. Elizabeth Armstrong, Essence Harden and Gilbert Vicario will co-curate the biennial.

“It is no coincidence that as we open a building defined by its innovative and forward-thinking design, we are also acknowledging OCMA’s important and pioneering foundation,” said Heidi Zuckerman, the museum’s chief executive. “California has long been a wellspring of innovation and creativity and CB22 once again gives us an opportunity to explore the richness of the state’s expansive and diverse creative communities.”

The museum, which focuses on contemporary Southern California art, broke ground in Sept. 2019; it was originally scheduled to open later this year for $75 million. The 1.6 acres of land for the project was donated by the Segerstrom family, whose various business interests built and own nearby South Coast Plaza.