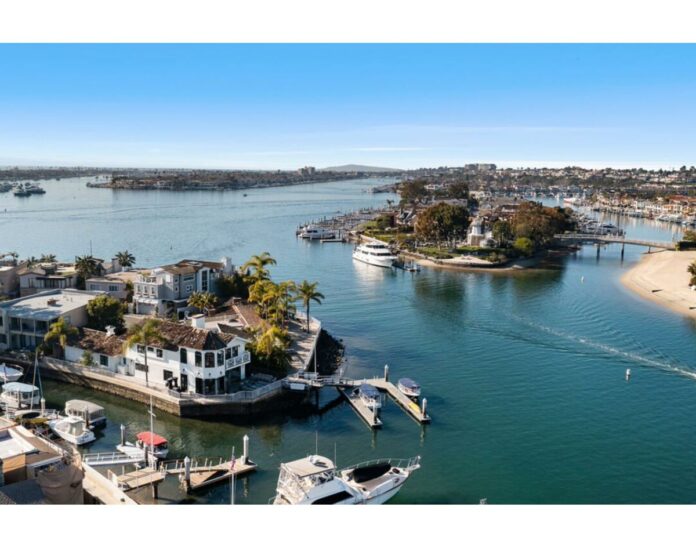 One of only eight homes on the Balboa Island community of Collins Island in Newport Beach has sold for $12.5 million, marking the first transaction for the neighborhood since 2020.

The sale of the 3,500-square-foot 7 Collins Island is also a new record price for the community, according to data from Zillow.

Homes rarely hit the market within the gated neighborhood, which is on the northwestern tip of Balboa Island, and whose homes are a few hundred yards across the bay from another ultra-exclusive community, Harbor Island.

The sale of 7 Collins, which closed at the start of the month, is just the third transaction in about seven years for Collins Island. The community is perhaps best known for its previous ownership ties; it was acquired in 1938 by James Cagney, the famed actor whose credits include “The Public Enemy” and “Angels with Dirty Faces.”

Local lore says Cagney won the island as part of a poker game, though newspaper clippings at the time reported he bought the island for $32,000. Reports indicate he sold the island in 1948.

The five-bedroom, four-bathroom home was built in 1974 on a nearly 6,000-square-foot lot. The home is a “completely reimagined residence that has recently been remodeled inside and out,” according to listing materials.

It last sold in October 2020, the most recent reported prior sale for Collins Island. The new sales price marks a 67% premium over the $7.5 million that the home sold for nearly two years ago.

Steve High and Evan Corkett of Villa Real Estate had the listing for that 3,116-square-foot home.

The four-bedroom, five-bathroom property sits on a 7,003-square-foot lot with 140 feet of water frontage with a dock that can accommodate a boat of up to 60 feet.

The last prior reported sale for the neighborhood was in 2015 with the sale of 5 Collins Island; that 3,635-square-foot home traded for $5.8 million.

“In my 35 years of selling real estate, I’ve maybe only seen four homes in Collins Island trade,” High told the Business Journal in 2020.

There are no homes currently listed for sale in the neighborhood, and only a handful are on the market for the larger Balboa Island community.

Best of Both Worlds

Current homeowners have a fee simple interest in the land, owning their individual properties and the land it sits on.

Collins Island is accessible by a private bridge situated off the tip of Balboa Island, and represents the best of both worlds, High said.

“Balboa Island to me is this quintessential recreational community that represents the beginning of Newport Beach, and Collins Island is the best of that lifestyle,” High previously said. “You get the fun and action of Balboa Island, but you also get security and privacy.”