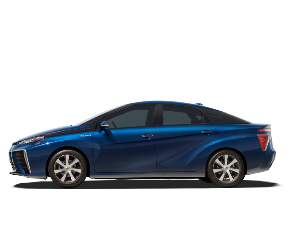 Mirai, which means “future” in Japanese, can travel up to 300 miles on a single tank of hydrogen and refuel in five minutes, the company said. It emits only water vapor. Toyota expects to sell about 3,000 of the vehicles through 2017.

The four-door sedan will be available for purchase at $57,500, Moznett said, adding that the average price for a new Prius is $25,000.

The automaker is also offering a $499 monthly lease with “minimal down payment,” in pricing similar to buy a Prius, he said. “Toyota is really trying to hit the market properly with this vehicle and create excitement.”

The initial group of dealers, which also includes four Bay Area dealerships and two in Los Angeles County, was selected based on their “advanced technology” vehicle sales experience and proximity to hydrogen fueling pumps.

That vehicle is available for lease through three Hyundai dealers—Tustin Hyundai, Hardin Hyundai in Anaheim, and Win Hyundai in Carson.