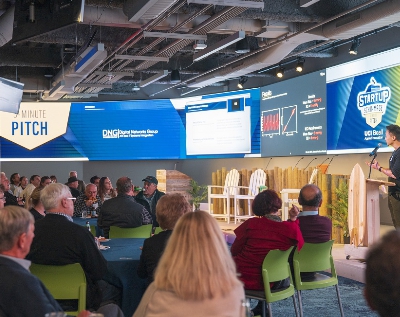 Out with the old, in with the new.

“We are building a more robust ecosystem with a bigger platform for more partners and events.”

It also provides collapsible and expandable event spaces, an area to build prototypes and a coworking space for startup founders to use as a home base.

Applied Innovation picked up a few notable partners as part of the expansion; Orange County’s first wet lab incubator, which is also backed by the Beall Family Foundation, and the UCI Esports team will share the facility at UCI Research Park.

These companies, at various points the three largest OC-based public companies by market value, created a foundation and support system to create jobs, add value for stakeholders and, ultimately, inspire workers to spin out and launch their own companies.

It was the idea that innovation at large and midsized companies could trickle down and make an impact on the broader community that inspired a university-led task force to create the University of California-Irvine’s commercialization and technology transfer branch in what was initially a 1,500-square-foot facility.

Ken Beall, Don’s son and a real estate entrepreneur himself, served on the committee five years ago and played a large role in spurring the program in its infancy with a $5 million gift from the Beall Family Foundation.

Since then, Applied Innovation has gone through two additional facilities, steadily growing in size.

The Bealls played a major role in the growth. Their contributions to the program now total over $30 million, which prompted the university to rename the center in the family’s honor earlier this year.

The new Cove facility currently holds 37 tenants that moved over with the organization, including members of the UCI Beall Applied Innovation Wayfinder Incubator, which is largely focused on supporting students, alumni and UC-affiliated persons’ move into business development and commercialization stages.

The program has had some big successes. Swift Health Systems Inc., also known by its consumer-facing brand name Inbrace, raised $45 million in Series C funding a few months ago and moved to a 16,500-square-foot office at UCI Research Park.

Other notable tenants include those with connections to capital, such as Tech Coast Angels, which is expected to launch an Orange County chapter fund next year with the aim to process “bridge” deals at a faster rate than normal.

Also present is Newport Beach-based Mark IV Capital, an investor in real estate and other sectors. It has been one of the area’s more active startup-focused investment firms in recent years, and contributed to AWM Smart Shelf’s $11 million Series A round this year.

One of the facility’s more tech-focused programs is the Beckman Laser Institute’s Convergence Optical Sciences Initiative (COSI), which aims to develop and commercialize biphotonic technologies for human health.

Chris Daltry heads the COSI program, and also runs his own startup in the program, one that is focused on developing X-ray and laser technology to improve diagnosis and treatment in healthcare.

It’s the latest area of focus for the Beall family; Ken recently told the Business Journal that after trying to convince other groups to fund the first-of-its-kind incubator, the family decided to step in to patch a “missing link” for life sciences entrepreneurs and companies in Orange County who need a place to “move their technology forward.”

The wet lab incubator gives members access to specialized equipment like fume hoods to contain and handle “wet” hazards such as chemicals or specimens.

It also comes with a host of shared resources including a tissue culture lab, a freezer farm to store research samples, and a microscopy and spectroscopy (radiation) area.

Its revenue stream comes from a standard coworking model; rates range from $1,950 a month for a lab bench to $5,950 for a private lab suite.

ULP has about a dozen members committed ahead of its opening, including Stan Rowe’s NXT Biomedical incubator; Rowe previously served as chief scientific officer for Edwards Lifesciences.

Others at ULP include Aracari Biosciences, an Irvine-based startup helmed by a trio of UCI professors.

While the wet lab has generated a buzz, Ken Beall said that it’s still in its experimental stages, much like a startup. He added, “We’re developing a minimally viable product and going to market … we’ve developed customers and we’re blessed to have great residents, but we’re still going to be pivoting.”

In addition to creating a central location for organic collisions and collaborations, it’s also leading a workforce development campaign to provide training opportunities and create jobs for students in relevant fields.

While Orange County doesn’t have a problem producing high-quality students at its universities, it often fails to retain these students once they graduate, Ken said during a Rock the Science campaign launch on Dec. 10.

It’s a troublesome theme that others are taking note of; Chapman University economists said that OC’s base of tech-heavy jobs has largely remained flat at 60,000 positions in recent years, while Silicon Valley and other areas continue to see growth (see main feature, page 1).

ULP hopes to reverse that trend with opportunities at the wet lab, as well as Applied Innovation, where young graduates and startup founders might make a good match.

Also hoping to disrupt the trend? Life sciences companies and startups in need of workers.

Mike Mussallem, CEO of Edwards Lifesciences, recently wrote in a letter of support for ULP saying, “As Edwards continues to grow in Orange County, where we have added hundreds of new employees in the last several years, we rely on these types of institutions to help prepare the local talent for new career opportunities with companies such as ours.”

While OCTANe is a partner in the UCI program, it is not a tenant at the new Cove; it plans to move from Aliso Viejo to Irvine’s Great Park Neighborhoods next year.