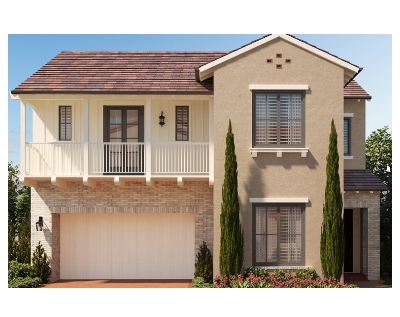 In a notable change in corporate strategy, Irvine Pacific LP, Orange County’s most active homebuilder for several years, is moving into higher-priced offerings on the Irvine Ranch.

The in-house building arm of Newport Beach-based Irvine Co. has begun marketing a new collection of homes called Ravello, which will open soon at the exclusive Orchard Hills community.

They appear to be the most expensive offering from Irvine Pacific to date, with prices to start around $1.8 million.

The gated-community homes are being built on one of the highest points of Orchard Hills, with “city light views spanning toward the coast,” the builder said. They’ll run from about 3,200 square feet to nearly 3,500 square feet, and have four bedrooms.

The homes come a few months after Irvine Co. took the wraps off Barcelona, a rare community of for-sale homes in the Irvine Spectrum area.

The Barcelona homes, next to Irvine Co.’s massive Los Olivos apartment community, are being built entirely by Irvine Pacific. They have prices starting around $1.4 million.

That’s also on the high side for Irvine Pacific, which has in general built more affordable product—relatively speaking—on Irvine Co.-owned land, while other builders have taken on the more expensive homes in both Irvine and Newport Beach.

Other homes Irvine Pacific now sells at the Orchard Hills and Eastwood Village communities start as low as the mid-$900,000s, according to the builder’s website.

Irvine Pacific has been the best-selling homebuilder in OC over the past five years, with a reported 851 sales in 2017 alone.

The Irvine Ranch, meanwhile, has been the biggest source of new homes in California over the past decade, and had about 1,800 sales, including those by Irvine Pacific, last year.

The fast pace of sales on the Irvine Ranch isn’t likely to change anytime soon, if Irvine Co. has its way.

It’s committed to building as many homes as it can on its land during the current market cycle, regardless of the builder, multiple real estate sources familiar with the privately held real estate company’s operations tell the Business Journal.

Irvine Co. gets a flat fee for the land it sells to unrelated homebuilders, and like other master developers, gets a second cut of the action in the form a profit participation agreement once a home is built and sold.

Local real estate watchers believe the strategic shift by Irvine Co. and Irvine Pacific is partly a result of other builders balking at the price of land at OC’s biggest source of new homes, coming amid recent news reports of slowing demand for new homes across California.

Across Orange County, the slowdown is more apparent in the upper end of the market.

Homes that are priced “$900,000 and under are going great, and selling as fast as ever,” said Mike Hunter, senior vice president for Irvine-based land brokerage Land Advisors Organization LLC.

“When you get to $1.5 million [and above], it’s been slower,” Hunter said, noting that buyers from China—a big source of sales in Irvine—are now finding it more difficult to get their money to the U.S. than in the early part of the year.

That deceleration noted by Wedbush’s McCanless hasn’t been seen in the pricing of Irvine land, which appears to be at an all-time high.

Land in Irvine—both on the Irvine Ranch and Great Park Neighborhoods—is now being sold to builders at prices approaching $6 million an acre. That’s roughly twice what it was going for in the early stages of the economic recovery.

Attached product and three-story homes with small or no backyards have allowed builders to squeeze in more homes per acre, which has made offerings more affordable, Five Point (NYSE: FPH) Chief Executive Emile Haddad told the Business Journal in September.

Irvine Co. has to date limited that type of development on its land, and has gravitated toward more traditional single-family home and attached townhome offerings.

At this point, the area’s dominant real estate company would rather ramp up work at Irvine Pacific and cut out the use of third-party builders—and assume more risk in terms of dealing with a potential downturn—than cut the per-acre price of its shrinking developable land, real estate sources tell the Business Journal.

Irvine Co. has made other notable changes to its building strategy over the past decade.

After the Great Recession, the firm essentially kicked off the latest cycle of homebuilding in OC by initiating its executive builder program in 2010.

Under the plan, a handful of builders were selected to put up homes in new Irvine developments. The Irvine Co. hired the builders, which were paid 3% to 6% of each home’s price.

The latest switch in plans isn’t bad news to all local builders; New Home Co. acts as a fee builder for Irvine Pacific on much of its local projects, including Ravello.

Irvine Pacific’s move to higher-end offerings comes as New Home has been going the opposite direction, with a focus on more affordable offerings in and around Orange County.