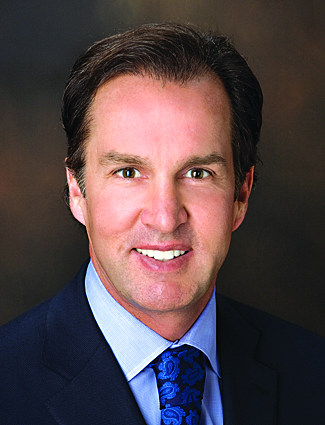 Orange County’s main hub of business might be the area around John Wayne Airport, but for several members of OC’s real estate development community, LGB has been the preferred destination over the past few years, not SNA.

The area surrounding Long Beach Airport—a 20-mile drive up the San Diego (405) Freeway from John Wayne—has been a goldmine of opportunity for OC-based developers, contractors and related businesses since the end of the Great Recession, with several million square feet of industrial, office, hotel and retail space built or repurposed.

The 266,000-square-foot center, whose first phase opened in May, has a development cost topping $100 million.

Also known as LBX, it’s the first large retail center built in Long Beach or neighboring OC in about two years, and the largest ground-up development in the current market cycle for Burnham Ward and affiliated businesses.

It’s a “great regional community property,” said Burnham Ward Chief Executive Scott Burnham and related development and investment business Burnham USA. “And even though it’s still (not finished), it has been getting a great reception from (that) community.”

The development wave in east Long Beach is largely due to aerospace giant Boeing Corp., which starting in 2011 offloaded nearly 220 acres in the master-planned Douglas Park in the airport area.

Irvine-based Sares Regis Group has taken the lead for much of the development, buying most of the land from Boeing in a series of deals in 2011 and 2012.

The companies worked together in the past. In 2009 Sares Regis bought land for a three-building industrial park on a former Boeing site in Anaheim, the first speculative industrial project in OC since the recession started. It quickly sold out.

The Business Journal reported this month that the companies could be nearing a deal for a roughly 30-acre Boeing site in Huntington Beach where more industrial buildings could be built. Sares Regis has yet to confirm the transaction, which other real estate sources said is nearing completion.

The deal would come as privately held Sares Regis approaches build-out of its 194 acres at Douglas Park, with one more four-building industrial project scheduled to break ground by the end of the summer.

They said they’ve taken a methodical approach to building out their land, whose users hail largely from the South Bay region in Los Angeles rather than OC.

“It’s taken us a cycle to get through it,” said Larry Lukanish, senior vice president of Sares Regis’ commercial division, speaking of its extensive area holdings.

Douglas Park has been a source of some headline-making deals over that time for the developer, which has sold some newly built properties at the business park to owner-users; leased other properties; and sold some land to other developers, including the 26 acres where Burnham Ward’s retail center was built.

In 2013 it got Mercedes-Benz USA to lease a 1.1-million-square-foot former Boeing 717 manufacturing facility; the carmaker uses the hangar as its Western region prep and distribution center.

Financial terms of Mercedes’ 15-year lease at the 52-acre facility weren’t disclosed, but it was reported at the time to be the largest industrial lease in Los Angeles County in over 25 years.

Hotel development in Douglas Park has been overseen by Santa Ana-based Nexus Cos.

In 2011 it bought nearly five acres on Lakewood Boulevard where it built the 159-room Courtyard by Marriott Long Beach Airport and a small amount of retail space.

A second Nexus hotel project next to the Marriott opened late last year. The 241-room project includes both a Hampton Inn and Homewood Suites hotel in the 153,000-square-foot facility. It’s managed by San Clemente-based Evolution Hospitality.

The dual-brand concept “creates enhanced and larger communal areas than what would be standard at a stand-alone property, benefiting both business and leisure travelers,” said a statement then by Hilton, which runs both brands.

Finding the right development partner for Douglas Park’s retail portion was the biggest challenge during the build-out of the entire project, said Sares Regis’ Lukanish.

“We looked at a lot of developers … none of them wanted to touch it, and most of the big (retail tenants) weren’t interested, either,” he said.

Enter Burnham Ward, best-known in OC for turning a former furniture-themed shopping center in Costa Mesa into the South Coast Collection, or SOCO, which is now a hub of hip retailers and culinary and design-focused stores and eateries. It signed up for the project in 2015.

The developer describes the Long Beach development as an “experiential retail and dining destination” with several nods, architecturally and otherwise, to the site’s former aviation and manufacturing uses.

“Retail is in transition,” said Burnham during a tour of his property this month. “You need to think ahead for what’s going to be important (to retailers) in five years or 10 years.”

In the case of LBX, that meant opening one of the region’s first Whole Foods 365, a smaller, more affordable version of Whole Foods markets, and adding other midsized anchor tenants, such as PetSmart, T.J. Maxx, ULTA Beauty and Nordstrom Rack.

A main-street designed portion called McGowen’s Approach is being built out and will feature a number of local eateries and shops.

The Hangar, a 16,800-square-foot food hall, is scheduled to open later this summer. It’s somewhat similar to the OC Mix, the center of Burnham Ward’s work at SOCO.

“It’s a little SOCO-esque, with a bit of a park environment,” Burnham said of LBX.

With development at Douglas Park winding down, the next big project near Long Beach Airport could come on the opposite, western edge of the airport on Cherry Avenue.

The city of Long Beach has been exploring potential reuses and redevelopment of the area in preparation for Boeing starting to market the land for sale late this year, according to recent city statements.

Commercial development appears to be the most likely reuse, though specifics haven’t been determined.