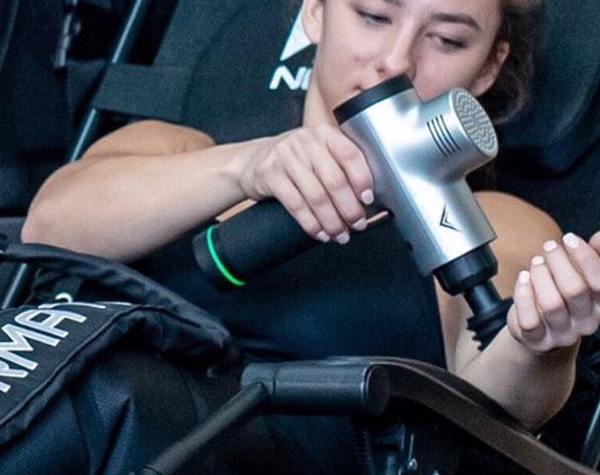 For fitness enthusiasts who are looking for recovery products after their at-home workout, Hyperice Inc. has you covered.

And after a new acquisition, the fast-growing company’s portfolio of products used by pro athletes and weekend warriors alike to soothe their aches and pains can have you covered, literally.

Irvine-based Hyperice makes sports recovery tools that use thermal, vibration and percussion technology, ranging from a handheld massage gun and an electronic foam roller that sell from about $100 to nearly $400. It’s gotten the endorsement, and financial backing, of pro athletes such as Blake Griffin, Lindsey Vonn, Troy Polamalu, and Luke Walton over the years.

The 10-year-old privately held company, which recently moved to new and larger headquarters in the Spectrum area, has found a quick-growing base of user interest for it products.

Chief Executive Jim Huether told the Business Journal this month that the company did close to $140 million in sales last year. Inc. Magazine placed Hyperice No. 16 among the state’s (and No. 1 among Orange County firms) fastest-growing companies last year, with two-year growth topping 800%.

Hyperice bought NormaTec, an advanced compression technology firm based in Boston, on March 5.

The two companies are “coming together to accelerate the future of human performance and health through innovation,” Huether said.

Gilad Jacobs, co-founder and chief executive of NormaTec, said that after three years of passing product referrals back and forth, it made sense to align the brands. Jacobs will become chief innovation officer of Hyperice.

Hyperice said it will bring NormaTec’s “Pulse” series under its umbrella, rebranded as NormaTec by Hyperice, to offer a variety of higher-priced sports recovery products that are designed to reduce inflammation and improve circulation.

NormaTec’s compression systems—which resemble a partial sleeping bag, and can cover a person’s legs, arms and hips—range from $1,295 to $3,495.

Terms of the deal were undisclosed, but Huether says the company is now positioned to double revenue in 18 months.

This month’s deal between the two firms comes at a time of increased interest for in-home workout and fitness-related products, as gyms across the country have closed shop for the time being amid health concerns.

“Over the last week, we’ve seen a nice uptick in sales. We’re engaging with our customers and seeing that more people are getting set up for a home gym,” Jacobs said.

One of the few notable national stocks to see a boost this month is New York’s Peleton (Nasdaq: PTON), which makes high-tech exercise bikes. Its shares are up nearly 40% this month, and it counts a $7.4 billion market valuation.

It’s also been looking to boost market penetration in workplace wellness, esports and even military and tactical uses, Huether said.

Hyperice and NormaTec share a lot in common, according to Huether.

“It’s funny. We started around the same time … but they were on the East Coast, and we were on the West Coast,” Huether pointed out.

Hyperice ramped its reach with endorsements and funds from Olympic ski champion Vonn and former Los Angeles Clippers forward Griffin (now with the Detroit Pistons), among others. Both remain shareholders in the company.

Both brands developed a steady base of followers, while enlisting engineers to improve the performance of their individual products.

“We decided we’d be better as one company, as an absolute leader in the category,” Huether said. “Our products are very complementary. Now we have a really big competitive advantage to offer everything—heat, cool, percussion, vibration and pneumatic compression.”

NormaTec products are more expensive than its Hyperice counterparts because of the complex sensor technology it uses, Huether said.

Over time, Hyperice will aim to drive those costs down through manufacturing competencies, new product bundles and flexible payment plans, Huether and Jacobs said.

Hyperice intends to expand fitness-related sales, its strongest category, while pushing into workplace wellness and esports, according to Huether.

Notable expansion efforts include Hyperice Wellness Pods, which are spaces that include an assortment of Hyperice (and now NormaTec) products for employees to use at their workplace “to relieve soreness and tension to improve productivity, health and wellness.”

The company has about 250 pods in corporate locations, including apparel maker Stance’s headquarters in San Clemente.

It’s also established partnerships with companies including Massage Envy, Marriott International and JetSuite to offer its technology to workers.

It expects to add another 5,000 wellness pods in the next 24 months worldwide in corporate environments and retail spaces.

Hyperice is currently rolling out pods in about 100 to 200 Best Buy stores, offering customers a chance to try products in store.

Katz worked with engineers at Marton Precision Manufacturing in Fullerton to develop the product and went on to show it to professional athletes and influencers including the late Kobe Bryant, whose trainer went to school with Katz.

Huether was introduced to Katz through a friend and jumped to Hyperice as an executive vice president in 2014.

At that time, the company was gaining traction with elite athletes, but knew that real growth would demand a different business strategy.

“We added new team members and turned to more of a technology company,” explained Huether. “The connection to aerospace is in our DNA. That’s one of the reasons our Hypervolt is so sophisticated, powerful and quiet.”

The Hypervolt is a handheld device that uses percussion sensors and technology to relieve muscle soreness, improve range of motion, promote circulation and aid in warmup and recovery. The product comes with various attachments for treating different areas of the body and is shaped for proper ergonomic use.

The company said it plans to continue scientific research at the University of North Carolina-Chapel Hill to measure the combined effects of both companies’ products to inform future innovation.

CIO Jacobs will lead the charge on research and development of new products.

He declined to comment on products in the pipeline, but noted promising opportunities ahead.

“(Sports) recovery is a core element of people’s routines. We started (with the idea) to help older pros extend their careers, then it became every athlete, then college kids started to figure it out, and now high schoolers are looking for it,” Jacobs said.

NormaTec’s 60 employees will continue to work in Boston, while Hyperice expects to add another 30 or so employees to its local team.

The company has plenty of room for growth and intends on keeping its headquarters local; last year it took 14,000-square-feet of space near Discovery Park and signed a five-year lease for the location.

Like Anthony Katz, founder of Hyperice, Huether grew up playing all kinds of sports.

“I played baseball in college, that sport is engrained in my family.”

Huether continued, “I wanted to be a sports agent, I planned on doing my joint MBA and JD after college.”

It was then that he fell in love with the aspect of running a business: “I was (with AEG) for the Kings, Clippers and Lakers.”

That is, until he found his “entrepreneurial edge” and went to work for a startup in the healthcare space, before joining a football helmet technology company called Xenith LLC, where he was one of the first five employees.

Similarly, he was one of five employees when jumping from Xenith to Hyperice as an executive vice president of marketing and business development in 2014.

A year later, Huether was promoted to chief executive; he has since watched the company vault from five employees to more than 100 and expand its footprint from three countries to about 68.

“It’s been a great, fun journey,” Huether said. “Our story is a great story for OC; executives and leaders working hard to make a big impact and improve people’s lives.”

Hyperice Inc. isn’t limiting its market to athletes or fitness junkies. Its products are for “every human that moves,” according to Chief Executive Jim Huether.

• Hyperice turned its attention to esports about two years ago and established a partnership with gaming development studio Foundry IV to study gameplay and develop preventive and recovery protocols. Subsequently, the company enlisted Pittsburgh Steelers wide receiver and video game enthusiast JuJu Smith-Schuster and others to advance education, health and wellness for athletes.

• A year ago, the company joined forces with Joseph Sakoda, better known as Da Rulk, a training and conditioning specialist for celebrities and professional athletes, to establish a performance optimization and career longevity program for firefighters.

• Hyperice launched its We Care wellness initiative for massage therapists last May. The company committed $1 million to the effort, with the aim to boost career longevity by 50%. It also established an advisory council with members from Marriott, Hilton, Hyatt, Massage Envy and Equinox.

• In October, JetSuite, which has operations at John Wayne Airport, partnered with Hyperice to improve wellness and performance for pilots. In addition to installing wellness pods at JetSuite headquarters in Texas, the company said it would create a 30-minute pilot specific warmup, recovery and maintenance protocol.