With Hydrogen, Jannard Shoots for a Three-Peat 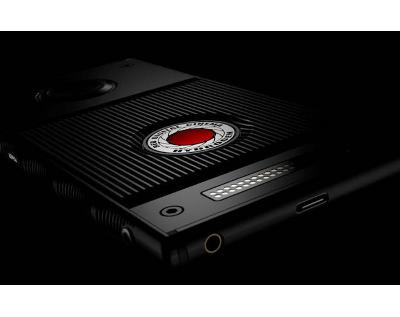 A row of black booths lined the soundstage at RED Studios Hollywood on a recent Saturday, each manned by an attendant guarding a yet-to-be-released Hydrogen One. The smartphone, developed by Irvine-based Red Digital Cinema Camera Co., enables users to see multidimensional content without headgear—Hydrogen’s screen acts as the proverbial fourth wall, behind which layered imagery immerses the viewer into 4-view, holographic scenes.

Invited filmmakers took turns stepping inside the booths to explore the phone and watch a reel of clips from James Cameron’s “Avatar,” Pixar’s animated feature “Brave” and other blockbusters, as well as photos taken with the phone.

Jim Jannard, the force behind Red Digital and Oakley Inc. in Foothill Ranch, stood nearby, fielding filmmakers’ questions and a glut of compliments. In another corner of the room, a crowd gathered around magician Drummond Money-Coutts, marveling at the tricks created by his nimble hands. The two, both masters of their crafts, apparently have a lot in common.

“He was up at our house three nights ago,” Jannard said. “He does stunts that have killed other magicians, and I said, ‘Drum-mond, what motivates you to do this?’ and he said, ‘It’s watching the faces light up in wonderment.’ I’m addicted to that, as well. I said, “You know, that’s exactly what’s driving me in this phone. Watching and listening to the reactions of people seeing what looks like a magic trick in a cellphone is pretty cool.”

Separating From the Pack

The inventor, who has about 90 patents to his name, founded Oakley in 1975. He took the company public in 1995 and sold it to Italy-based Luxottica in 2007 for $2.1 billion. He launched Red Digital in 2005, turning over the reins to President Jarred Land in 2013 to focus on Hydrogen. Jannard kept the project under wraps until last summer, and in September announced an investment in Leia Inc., a Cupertino-based firm that’s providing light-field technology for the phone’s screen. He also invested in A3D, whose algorithm converts Hydrogen’s audio into “expansive, 360-degree sound, with or without headphones.” The Android phone also has 4K cameras that can produce 3D and 4V content; a headphone jack; external slots for inserting SIM and microSD cards; and a modular system that enables the addition of an extended battery and other components.

And that’s not all—Hydrogen, when paired with RED Digital’s yet-to-be-released prosumer camera, serves as a 3D viewfinder.

“I don’t do normal stuff,” Jannard said of his motivation to pursue the project. “I would never get in the cellphone business and do something common or like everybody else—I’d kill myself before that. The trick is to see how many surprises you can deliver, things that people never imagined. For us, it is the display technology, the audio, the form factor, and the modularity. It’s a combination of things that really differentiate Hydrogen from the rest of the industry. People love differentiation. We don’t all go to Target to buy our jeans. Some buy ripped jeans to differentiate, and a cellphone is about the only thing left we don’t differentiate. It is also the single-most important thing we own. If you ask people, ‘You have to give up on your car or your cellphone today,’ most would say, ‘I’ll put Uber on my phone and give up my car.’”

The phone, which RED Digital also refers to as a “holographic media machine,” is scheduled for an August delivery, priced at $1,195 for the black aluminum model, $1,595 for titanium. AT&T Inc. and Verizon Communications Inc. signed on as service providers in the U.S., and América Móvil in Mexico will cover markets in Latin America.

RED will launch Hydrogen Network, an online platform and an app with 4V content from major studios and video game developers. It will also let fans of Red Digital cameras—Redusers—and other filmmakers set up channels and upload their own content or adapt existing footage to the 4V format.

“One of the biggest fears is that you get this phone with this cool display and you have nothing to watch,” Jannard said. “When they go to the Hydrogen Network, they have a whole bunch of choices. And it’s not just for studio content. With the Redusers, we have a lot of content creators who want to create quality four-view content and need a place to put it besides YouTube—those who shoot documentaries, music videos, all kinds of things.”

“I’m a big fan of Made in the USA,” Jannard posted in a Reduser forum shortly after the event. “Also. 98% of Oakley sunglasses under my watch were made in Foothill Ranch, CA. All of RED cameras made in Irvine, CA. But it is impossible in today’s market to make cell phones here.”

RED Digital has 370 employees and revenue of about $300 million, according to Business Journal estimates.

“It is one of my many personality disorders,” he said.