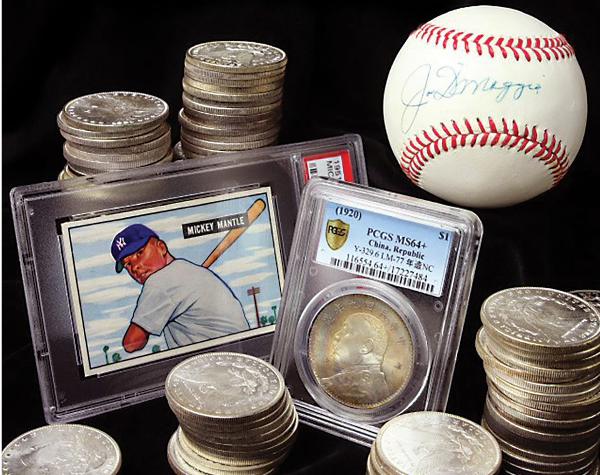 When Nat Turner was about 5 years old, his father gave him a 1975 Hank Aaron baseball card.

Thus began an obsession with trading cards for a variety of sports, with his interest expanding from baseball to football and basketball, buying notable cards such as a prized 1996 rookie edition for Kobe Bryant.

Turner, who would sell and buy cards on eBay and at card shows, eventually became known for having one of the world’s largest collections of Michael Jordan basketball cards.

“It’s a niche industry. It hasn’t had a lot of interest from venture capitalists. In the last couple of years, that’s changed.”

Collectors Universe went public in 1999 and spent the next decade with a market cap around $30 million. In recent years, the company’s value slowly crept up until late 2020, when Turner’s investment group offered $700 million, or a 30% premium to its value at the time.

By last February, it bumped the offer to $853 million to complete the deal.

Turner, who last year became executive chairman and CEO at Collector’s Universe, replacing longtime CEO Joe Orlando, told the Business Journal that he has big plans for expansion, as the industry for trading cards and other collectibles has continued to grow over the course of the pandemic, with no signs of a slowdown.

“The hobby is growing,” Turner said. “More people are collecting cards than ever before.”

The 35-year-old Turner says he “grew up everywhere,” living in nine different places before high school, including Texas and Europe, because his father was in the oil and gas industry.

In the eighth grade, he began a web design company and started building internet businesses, such as a gift cards website in high school. While a junior, he began an advertising technology company, Invite Meeting, that he sold three years later for $81 million to Google in 2010.

“I’ve been an entrepreneur for a long time,” Turner said.

He didn’t want to be pigeonholed, so he decided to pursue a “passion-oriented project.” A cousin who suffered from childhood leukemia inspired him to start cancer researcher Flatiron Health Inc.

After he sold Flatiron for $1.9 billion to Roche Holding AG in 2018, he spent time with his parents analyzing his next move.

“I knew I didn’t want to retire and hang out at the beach, which was kind of boring,” he said. “I was still obsessed with trading cards.”

While he considered starting a business from scratch, he decided to visit Collectors Universe.

“I fell in love with the company,” he recalled.

Of the growing collecting industry, “I really wanted to do something big,” Turner said. “To drive the hobby forward. I’m very passionate about the hobby.

“Collectors Universe is the leading in that niche industry. People have been there a long time. It’s a great environment.”

Turner led an investment group that included hedge fund magnate Stephen A. Cohen, owner of the New York Mets baseball team, and Dan Sundheim, who is sometimes referred to as the LeBron James of Wall Street for his ability to make any company look good. Sundheim, whose D1 Capital opened a $5 billion fund in 2018, is part owner of the Charlotte Hornets basketball team, and is a collector of art valued at close to $400 million.

While Turner declined to disclose 2021 revenue, he said it “definitely grew” and it “can definitely grow a lot” more.

A sign of the potential growth can be seen at the company’s large and expanding Santa Ana facilities at the Pacific Center office complex not far from the Costa Mesa (55) Freeway.

The space is being used to handle an ever-increasing amount of product.

There was so much volume that the company began declining lower end fees of $10 to value a card and now has a minimum $50 a card fee. The company has charged up to $10,000 for some valuations.

It’s grown from 600 employees at the end of 2020 to about 1,100 at press time, including 1,000 in Orange County. It plans to expand to 2,000 employees by the end of the year, ranging from entry level positions to software engineers.

One of Turner’s recent hires was someone he knows quite well: Chief Financial Officer Jason Harinstein, who was previously CFO at Turner’s Flatiron Health. When Harinstein was senior vice president of corporate development and strategy at Google, he was responsible for buying Turner’s company.

“On the personal front, as a collector, it’s a privilege to make a positive impact on collectors’ experiences and grow the hobby,” Harinstein said.

“A Super Mario 64 game recently sold for $1.56 million, while other Wata-graded games that have set records include a 1987 early production copy of The Legend of Zelda, which sold for $870,000, as well as a copy of Super Mario Bros. for NES, which sold for $660,000,” according to the Sports Collectors Digest website.

A security system that includes constant video monitoring makes sure the cards aren’t lost or stolen by employees. Once graded, cards are often welded into cases that if someone broke into it to manipulate it, would show evidence of being tampered with.

One of the reasons for the company’s success is the growth of fraud. For example, China last November seized 7.6 tons of fake Pokémon cards.

“That’s one of the main reasons we’re in business,” Turner said.

“We see a lot of [fraud]. We reject thousands of items a day.”

Nat Turner thought his garage in a gated community in Irvine was safe. However, he found out the hard way when a thief recently stole $1 million worth of cards and other items, including a computer, from the trunk of his car.

Among the missing were gems featuring Babe Ruth, Wilt Chamberlain and Kevin Garnett, according to an article on Action Network.com, which first reported the theft.

When Turner called the Irvine police, the dispatcher asked for the value of the stolen goods.

“Are you serious?” the voice on the other line responded.

When Turner used Apple’s “Find My Device,” he traced the suspect to a local Wendy’s, and police eventually arrested the suspect.

Professional Sports Authenticator, or PSA, a unit of Collectors Universe, has graded each on a scale from the lowest 1 to the highest 10. Each grade represents a variant in quality.

“This is an ultra in-demand card because it is Mickey Mantle’s first Topps card,” said Collectors Universe Chief Marketing Officer Steve Sloan while giving the Business Journal a tour.

The evaluators look for things like corners, edges and even the centering of the photo. Any dings will reduce the grade. The lower the quality, typically the lower the value and the more common is the card.

“On a 3, you can see the centering is off to the right. That detracts from the eye appeal. Collectors love eye appeal,” Sloan said.

“As you move up the scale, you’ll see that the centering will improve as will the sharpness of the card.”

While any dings will detract from overall grade, a Mickey Mantle rookie card rated a 1 is still worth $10,000, Sloan said.

A grade 8 might be worth in the hundreds of thousands of dollars while a grade 9 is in the millions.

A grade 10, for which there are only three available, may fetch upward of $20 million, Sloan said.

One of those owners is Denver resident Marshall Fogel, who purchased the card for $121,000 in 1996 and now holds it in a museum.

“In those days, they called me stupid,” Fogal told a Denver news station in 2018. “Now, they call me wisely eccentric.”