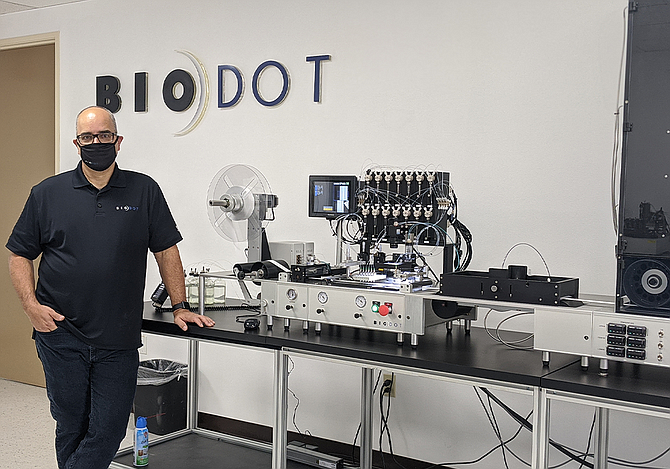 It didn’t anticipate a global pandemic, which drove demand higher than ever before for its ultra low-volume dispensers that are used to dispense chemicals for a variety of diagnostics tests.

Since the beginning of the year, the 26-year-old company has received product orders from more than 70 clients seeking to produce antibody, antigen and PCR tests for COVID-19.

Those orders will translate into the production of about 500 million tests in the coming months, from some of the largest test manufacturers in the industry, Chief Executive Tony Lemmo told the Business Journal on Sept. 17.

Demand isn’t expected to let up.

The current need for COVID-19 tests is keeping BioDot’s team busy seven days a week, and Lemmo said once a vaccine is produced, there will be an additional need to test the vaccine’s effectiveness and determine whether additional booster rounds are warranted over time to maintain immunity.

Someone will have to develop an antibody test for that purpose, too.

“The industry is going through a renaissance and the money going into these diagnostics companies isn’t going to go away,” Lemmo said.

BioDot, which traded hands seven months ago, is proof of increasing capital investments in the diagnostics industry.

Eight days later, the coronavirus pandemic was declared by the World Health Organization.

BioDot was already in the middle of conversations with clients in need of their chemical dispensers, which dispense “dots” of chemicals onto test materials that are used in the isolation, extraction and analysis of DNA and antibodies.

The company opened a second manufacturing facility to help with production in North Carolina in May.

The deal with Artemis had been in the works for about a year, because BioDot wanted additional working capital to scale the business, as well as liquidity for some of its original shareholders including founder Tom Tisone.

Following the undisclosed transaction, which is estimated to be valued up to $100 million, Tisone stepped down and Lemmo transitioned to the CEO role.

Lemmo, a chemist by training, joined BioDot in 1996 and subsequently ran an offshoot of the company.

He returned in 2006 as vice president of R&D, following BioDot’s acquisition of his own company Entevis Inc. He was promoted to chief operating officer in 2011 and added the title of president in 2017.

BioDot picked Artemis as its new owner because it “embraces the idea of differentiated technologies, like we have, that solve critical problems or play a role in a critical process,” Lemmo said.

“That’s a unique perspective from an investor’s point of view—a focus on working with companies that have high-precision and accuracy equipment.”

Additional perks: Artemis has a smaller portfolio size than other PE firms and BioDot has maintained its operational independence since the acquisition.

“We knew we wouldn’t be insignificant to Artemis; we’d be a critical focus for them,” Lemmo said.

At the same time, “We knew we could keep our identity. We felt strongly about preserving BioDot—the name, the brand, the culture.”

“We solved the major problem within the industry, which was that you couldn’t get quantitative delivery of reagent that was stable over time,” Lemmo said.

Most ultra low-volume dispensing machines ran into the problem of “drift”—the machine would dispense the right amount of fluid consistently throughout the morning. Come back after lunch, it wouldn’t be the same.

“Our technology solved that because it’s based on a highly programmable and highly accurate syringe pump.”

In addition, BioDot’s technology allows for multiple drop formulations, and speeds up the process by controlling where the drop lands on the surface of the test material. This prevents cross-contamination in the manufacturing process.

BioDot quickly established itself as a leader in the field based on its IP (intellectual property) portfolio, Lemmo said.

BioDot has always focused on the rapid delivery of its products.

Other industry products generally ship a few months after purchase; and the company condensed its timeline to four to six weeks when the pandemic hit.

“Because we were primarily self-funded, we had to always have a focus on developing a product that meets a need and can be sold, and be sold again and again,” Lemmo said.

After a couple of years in business, BioDot had developed a variety of systems—that range in price from $20,000 to $1 million—and handle most test manufacturers’ needs.

BioDot continues to partner with its clients on feasibility studies and customize its machines upon request.

For example, it created a unique dispensing system for an ophthalmology company that needed liquid delivered to an ocular implant.

Though BioDot doesn’t disclose the names of its clients, “if you were to name the leading in vitro diagnostic manufacturers, there is a high likelihood that they are all our customers,” he said. “The same goes for the second tier of manufacturers and leading academic institutions.”

The initial shock of the pandemic—along with supply chain issues—has subsided for now, Lemmo said.

“Reality has set in,” Lemmo said. “We, as a society, won’t go back to not knowing whether we have the flu, COVID-19 or another infectious disease.”

Recent regulatory actions that have allowed for the expansion of telehealth services, have only fueled growth in the diagnostics space, Lemmo said.

“We’ve been the world’s premier provider of manufacturing equipment focused on low-volume dispensing for diagnostic products for quite some time, and I’m convinced we’re on a growth path.”