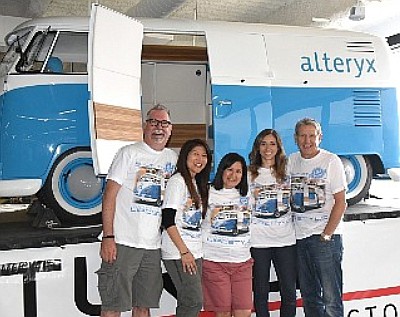 Alteryx: this bus was made for moving

Shares of data analytics software maker Alteryx Inc. in Irvine fell after forecasting second-quarter sales below analyst estimates because of the coronavirus.

Second-quarter revenue is expected to be in the range of $91 million to $95 million, below the consensus analyst estimate of $108 million.

The company experienced “an abrupt and significant change in customer buying behavior late in the quarter” as the pandemic started to hammer the world’s economy, Chief Executive Dean Stoecker said in a statement.

In after hours trading Wednesday after the report, shares fell as much as 13% to $106.48 for a market cap of $7 billion. In Wednesday midday trading, shares were around $115 and $7.6 billion market cap.

Alteryx has lost about 25% of its market value since mid-February.

The company said COVID-19 and “rapidly changing global economic environment” caused it to withdraw full-year guidance issued on Feb. 13. That prior guidance forecast revenue in the range of $555 million to $565 million for an increase of 33% to 35% year-over-year.

The company reported first quarter revenue jumped 43% to $108.8 million in the three months ended March 31, topping the average analyst estimate of $105.5 million and up from $76 million in the same period of 2019. The company also showed a net loss of $15.5 million for the quarter compared to $5.9 million net income a year ago.