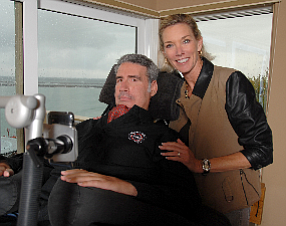 Augie Nieto’s essential work in combatting amyotrophic lateral sclerosis (ALS), through his namesake Augie’s Quest to Cure ALS, would be more than enough for the fitness industry icon’s inclusion in our Business People of the Year edition just about any year.

It was a return to his business roots, though, that gave one of Orange County’s most inspiring business execs this year’s nod for Business Person of the Year in the retail sector.

In July, Life Fitness, a Rosemont, Ill.-based maker of products for gyms and health clubs, brought back Nieto — who founded the firm in the 1970s, and ran the company for decades — as an investor and board member, as part of a corporate overhaul of the company that does $1 billion in sales annually.

“We are thrilled to bring Augie back as an investor and a strategic partner,” said Jay Bernstein, a partner at KPS Capital Partners, an investment firm that took over as majority shareholder at Life Fitness in July.

“His experience and vision will help Life Fitness build on its leadership position and drive forward its legacy of being a strong, focused, and innovative global market leader.”

Neito served as president of Life Fitness from 1977 to 2000, and “helped transform the company from a single-product business to a market leader in the commercial fitness equipment industry,” noted a story last year in trade publication Club Industry.

He stepped down from the firm in 2000, a few years after it was sold to Brunswick.

In 2005, he was diagnosed with ALS, a muscle-wasting condition more commonly known as Lou Gehrig’s Disease.

Since then, he and his wife, Lynne, launched and have overseen Augie’s Quest, which has raised more than $165 million to fund research to find a cure for ALS.

While medical issues now confine Nieto to a motorized wheelchair that allows him to communicate via computer, ALS hasn’t stopped the business dealings of the Corona del Mar resident.

In 2016, he visited the Illinois factory of Life Fitness for the first time in over a decade; the trip was part of the California Coast Gold Chapter of the Young President’s Organization forum in Chicago.

That meeting appears to have been a bit of a fact-finding mission. Nieto said last week that he “actually put in a bid for Life Fitness along with another fellow YPOer but was not successful.”

After KPS later bought the company, “I was able to invest alongside, and they invited me to join the board.”

“Being part of creating [Life Fitness] was one of the most rewarding things I’ve done in my life, up until launching this fight to find a cure for ALS,” Nieto said at the time of the 2016 trip.

Among notable work in OC, he was part of a board committee at Quest Software that helped negotiate the $2.4 billon sale of Vinny Smith’s Aliso Viejo firm to Dell in 2012.

More recently, “I’m on the board of Hydromassage, Life Fitness and I am an Operating Advisor to North Castle Partners,” he said.

“Locally, I am an Operating Advisor to Fuscoe Engineering, as well as Systems Pavers. I serve as Chairman of the ALS Therapy Development Institute, our research institute that Augie’s Quest funds.”

“Augie expects greatness from everyone, loathes excuses, rewards results, and always has time for friends. He’s always been an inspiration to everyone he encounters,” Chris Clawson, a Life Fitness exec during Nieto’s prior tenure, told Club Business International in a 2017 profile.

Nieto said last week that “Chris worked for me when I ran Life Fitness, so it feels like we are getting the band back together again!”